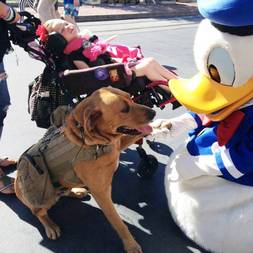 Jake, a yellow Lab mix, spends his days tending to three-year-old Kaitlin Abner. Kaitlin suffers from a degenerative brain disease known as Methachormatic Leukodystrophy.  Jake is living an important life as a service dog, but not too long ago he was a homeless stray.

A few months ago Jake was brought to Mary S. Roberts Pet Adoption Center in Riverside, California. He was thin, dirty and very hungry. The center neutered, microchipped and vaccinated Jake to prep him for adoption. Right around the time Jake was ready for adoption Mary Slavik of Big Paws Canine Academy came to the center looking for potential service and therapy dogs.

Adoption counselor Jack Dehler thought Jake would be a great match. “Jake really has a bright earnestness about him. Even though he is a high energy Lab, he just has that kind of nature about him that makes him different,” Dehler said. Mary conducted a short evaluation and determined Jake could be a good therapy dog.

Jake spent the next three months in training. He learned basic commands and also became comfortable around walkers and canes and other situations that would prepare him to be a service dog. In September Jake got his placement with the Abner family. Kaitlin, whose father is Master Sgt. Chris Abner an active U.S. Army serviceman and Purple Heart recipient, relies on Jake to help regulate her body temperature. Kaitlin’s disease doesn’t allow her to regulate her own body temperature, so Jake acts as an blanket in the winter months. He also blocks people from getting too close in the summer so Kaitlin stays cool. In addition to his service duties he brings daily smiles and happiness to her life.