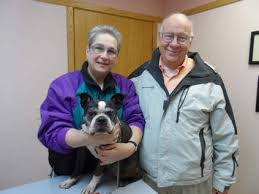 A Boston terrier is lucky to not only be alive but to have suffered only minor injuries after being hit by a car and ending up in between the bumper and the engine of the car.

A couple was driving down a dark road in Crest Hill, Illinois when a small animal darted in front of their car. They tried to slow down but were unable to avoid the animal. After the collision though they saw no sign of the animal and assumed it had run away.

The couple continued driving home and didn’t assess the damage to their vehicle until the next morning. When they examined the grille of their car they saw two eyes staring back at them. In a panic they drove to the Carol Stream Animal Hospital for help.

When Dr. Elise Cibrassi heard a dog had been hit by a car she ran out to help and was shocked to find the car with no dents or cracks and no blood anywhere. Instead she saw what the couple had seen two eyes staring at her through the grille of the car.

“He wasn’t bleeding. He wasn’t seizing. His mouth was closed and he was breathing fine,” said Cibrassi. “He had no cuts, bruises or lacerations anywhere on his body.”

The dog had simply been resting on a little shelf between the engine and the bumper.

“He came out wiggling his little butt,” said Cibrassi. “He is just one really, really lucky dog.”

Cibrassi examined the dog and found nothing immediately wrong with him. Further examination found a few minor fractures.

The dog was wearing his rabies tag and they were able to track down his regular veterinarian who in turn contacted the dog’s owner.

The dog’s name was Spencer and he belonged to Carleen Vandergrift. Spencer had run from his home on the day of the accident when he became spooked by a car alarm.

Spencer is now safe at home and recovering from his ordeal.