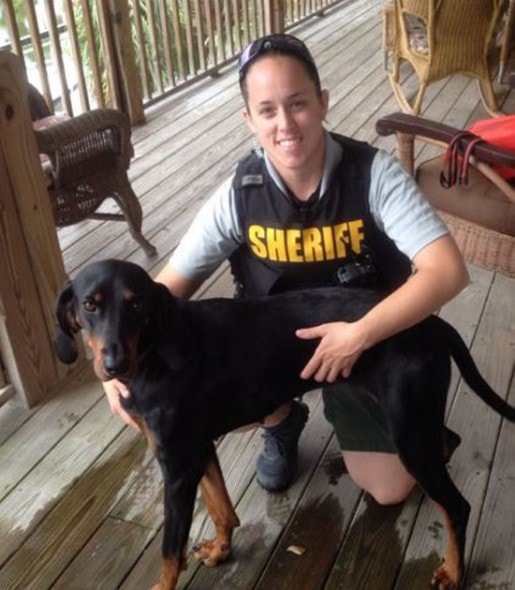 Deputy LeAna Cudzilo risked her life to save a drowning dog back in August. Her effort to save a coon hound named Fern has earned her the honor of being named Manatee County Deputy of the Month for December.

On the night of August 21st Fern became startled by the invisible electric fence her owner had just installed and ran into the nearby canal and had no way of getting out.

Deputy Cudzilo responded to the scene and assessed the situation.

“You could hear the dog howling but it was sounding farther and farther away,” said Cudzilo. “She was swimming out toward the ocean.”

The seawall was too high for Fern to get out of the canal on her own, so Cudzilo borrowed the dog owner’s oat and began searching the canal for the dog.

“We finally found it as it was making it out of the (Gulf),” said Cudzilo. “Every time we got close, the engine scared her, and she ended up swimming to the tip of the Anna Maria fishing pier.”

The pier was a popular spot for shark fishing, but despite the danger of sharks Cudzilo jumped in the water after Fern who had begun to struggle and go under. Cudzilo was more concerned about reaching Fern in time.

Cudzilo successfully reached Fern and helped bring her onto the boat, saving the dog’s life and reuniting her with a very relieved owner.

“Her actions went beyond the call of duty and averted the tragic loss of a pet, for which Deputy LeAna Cudzilo is awarded Deputy of the Month for December,” said Manatee County Sheriff Brad Steube.

0 thoughts on “Deputy Honored for Saving Dog from Drowning”