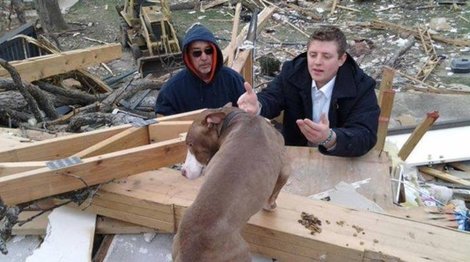 Over a week after the devastating tornadoes hit Illinois a dog was rescued from the rubble and reunited with his relieved owner.

Jacob Montgomery was devastated when his apartment was destroyed and his dog couldn’t be found. Dexter, a six-month old pit bull, went missing during the tornadoes. Montgomery posted pictures of Dexter online hoping someone might find him. As the days passed though there was no sign of Dexter.

Then on Tuesday morning Randy Ford, an employee of the apartment complex, found Dexter in the rubble of one of the destroyed apartment buildings. Dexter was visibly skinnier, but alive. He was taken to a vet to be checked over and is now safe and sound with Montgomery.