The following is a narrative by Life With Dogs fan Laura Ooms. 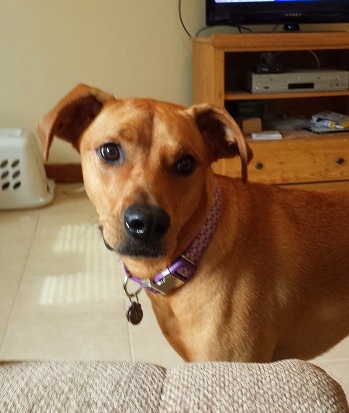 On August 3rd, my husband and I came home to a house fire.  When we opened the door, we could not get in because the smoke was too heavy.  Our two beloved dogs were trapped.  We lost our dog Charlie to smoke inhalation.  Tela was pulled out of the house, completely unresponsive.  The fire department had life saving pet resuscitation kits on their truck and were able to get her breathing.  A local sheriff who was at the scene rushed Tela and myself to the vet, where she remained overnight in an oxygen chamber.

Tela survived the night, but as the days progressed we noticed she was not behaving normally and saw a neurologist.  Unfortunately, Tela suffered some serious brain damage due to lack of oxygen and carbon monoxide poisoning.  She could not hear or see, her legs crossed and rolled over when she walked, and she lost the ability to use her tongue.  We fed her baby food through a syringe for several days to sustain her. 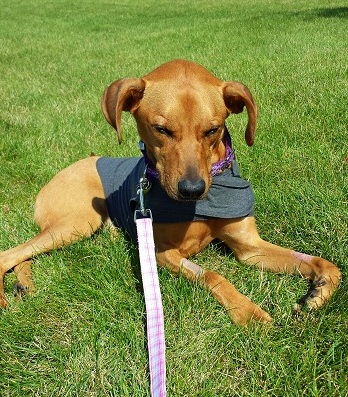 Slowly, Tela started to improve.  She began eating on her own and straightened her legs out while she was walking.  Soon after, she regained her sense of hearing.  Since then, the progress has not stopped! Tela only suffers from blindness, but other than that, she is a happy and healthy dog.  She is gaining confidence each day and is adjusting very well to being blind.

I want to share Tela’s story as she has survived and recovered from some very extensive brain damage and would like to give hope to other families whose pets have suffered brain trauma.  I could not find a lot of success stories, and the only thing that can heal brain damage is time.  Also as a thank you to the firemen, who fortunately for us, had the pet equipment on their truck.