Search and rescue crews working to clear debris and locate those trapped by the destructive force of typhoon Talas in central Japan have shared a touching, bittersweet tale of devotion. Nearly 50 deaths have been reported since the storm moved through the area, and with dozens of missing person reports, the massive cleanup effort continues at a breakneck pace as precious time passes. The city of Tanabe is still conducting a search for four missing residents after a number of homes in the vicinity were crushed by a massive landslide. Japanese Self Defense forces used helicopters to access those trapped in remote locations while rescue workers moved in on foot to search the area for survivors.

In the midst of their search, rescuers say they froze in their tracks as they worked through a debris pile and were interrupted by the sound of a crying dog. 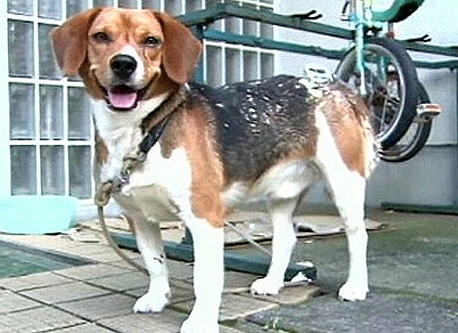 Scrambling to clear splintered wood, mud and other debris from the scene, they eventually made their way through the wreckage and were moved by what they discovered. Buried beneath the crushing weight of their collapsed home were a Beagle named Chiro and his owner, Masae Yamamoto. Chiro was alive and alert, but Masae had not survived. In what appeared to be a final act of love, she had cradled the dog in her arms, offering it protection that may very well have saved its life.

Chiro appears unscathed and is said to be in good spirits. He’s been featured on local TV and is enjoying stardom, eating on camera and hamming it up for viewers. One of those viewers, a realtive of Yamamoto said, “Yamamoto loved dogs. I believe rescuers were able to find her body so quickly, because of Chiro.”