Warning signs have been showing up all summer: Several lakes and ponds in Kansas and across the nation have been reporting contamination from toxic blue-green algae.

Recently, three dogs were fatally poisoned from exposure to the algae at Milford Lake. A fourth dog survived after treatment at the Kansas State University Veterinary Medical Teaching Hospital, but will require further monitoring and special care.

Also known as cyanobacteria, blue-green algae may bloom in fresh water where environmental conditions make it possible for these organisms to grow and replicate rapidly. Conditions that are typically promote blue-green algae blooms include warm weather, lots of sunlight and the presence of nutrients in the water, which are often associated with agricultural run-off.

“Any time you have an algae bloom, you have a potential for poisoning, which happened with these dogs. Two of them were admitted to the intensive care unit at the teaching hospital,” said Deon van der Merwe, assistant professor of diagnostic medicine and pathobiology and head of the toxicology section at the Kansas State Veterinary Diagnostic Laboratory. “Unfortunately, both of these dogs died despite aggressive attempts to treat them.”

Another dog that was brought to the emergency room at the teaching hospital was more fortunate. Veterinarian Nicole Smee, a small animal internal medicine resident at K-State, attended the case the morning after the dog had been admitted. 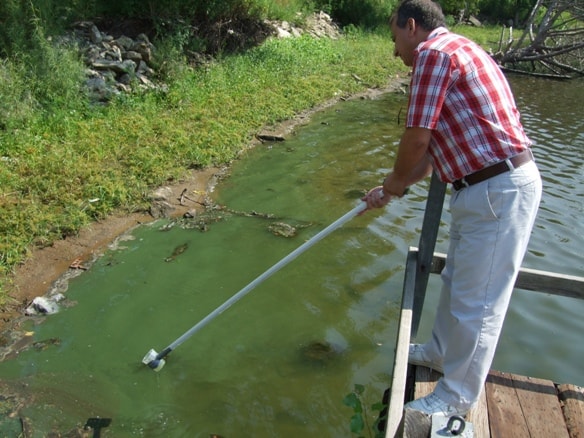 “All these dogs presented with acute liver failure, so we tried managing them supportively to give them enough time to let their liver recover from that initial injury,” Smee said. “The dog that survived received three units of plasma to help replace the clotting factors and proteins that were lost as well as a fourth whole blood transfusion. We told the owners every day that her prognosis was guarded and that we didn’t know what the long-term effects on the liver would be. We’re hoping she’ll have enough liver function so she won’t be on medication the rest of her life.”

According to Gordon Andrews, the veterinarian handling the case, extremely severe liver necrosis was seen microscopically at postmortem examinations of tissues from all three dogs that died. Necrosis of liver cells is a typical consequence of ingesting water that contains toxins produced by a type of blue-green algae called Microcystis.

“Animals that ingest contaminated water typically develop vomiting and diarrhea within the first few hours following exposure,” van der Merwe said. “It attacks the liver so quickly and dramatically. If the dose is high like it was in these dogs, the patient will probably die in spite of treatment.”

“Some types of blue-green algae produce neurotoxins that can lead to muscle spasms, convulsions, weakness and paralysis,” he said. “Death can occur due to paralysis of the muscles used for breathing. People who are exposed to contaminated water while swimming, boating or skiing often develop skin rashes, eye irritation and respiratory symptoms.”

The Kansas Department of Health and Environment issued a blue-green algae warning for Tuttle Pond State Park in Manhattan on Aug. 29. Van der Merwe went to the river pond Aug. 26 and took samples of the water for analysis.

“The signs of blue-green algae in water may include changes in color or the appearance of a scum — usually green, but occasionally brown or red — at the water surface or at the downwind shore,” he said. “If such changes in water are noticed, ingestion of the water by people or animals should be avoided until the source of the changes had been determined.”

Water samples for blue-green algae identification can be submitted to the Kansas State Veterinary Diagnostic Laboratory, which is in Mosier Hall in the K-State veterinary medicine complex. When collecting a water sample, the laboratory recommends using gloves to prevent skin contact. Collect about 20 fluid ounces — or 500 ml — in a clean, leak-proof container and include any visible scum. Keep the sample refrigerated, not frozen. Samples can be dropped by the laboratory from 8 a.m. to 5 p.m. weekdays or shipped to the laboratory in an insulated box with a cold pack. The address is Kansas State Veterinary Diagnostic Laboratory, 1800 Denison Ave., Manhattan, KS 66506.

For more information, please contact the laboratory at 866-512-5650 or go online to http://www.vet.k-state.edu/depts/dmp/service/.

1 thought on “Lethal Ingestion: Blue-Green Algae A Danger For People and Pets”