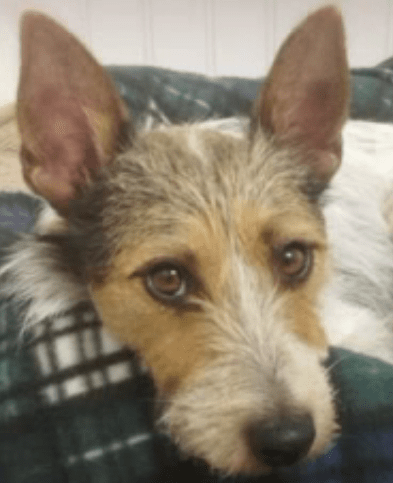 Garrett is a survivor. Nearly killed by a car he was rescued by Amy Heinz just hours before he was to be euthanized. Heinz placed him with a foster, but his first day there Garrett slipped out of his collar and took off. For months Garrett survived in the cold winter in Iowa on his own before he was finally found and caught.

Amy Heinz rescued Garrett from a shelter in Kansas with just hours to spare. She brought him to her shelter, A Heinz 57 Pet Rescue, in Desoto, Iowa. Heinz placed Garrett with a foster home so he could get the care he needed. Unfortunately while out on a walk the first day with his new foster Garrett managed to slip out of his collar and run off.

Heinz was contacted that night and quickly put fliers up all over the area. Calls came in with sightings of Garrett, Heinz followed every lead trying to find him. “From the minute I tell a shelter I will take a dog, I am responsible for that dog,” said Heinz. Then the leads became fewer and fewer and a month went by with no leads. At this point Garrett had stayed alive for three months on his own, and rescue volunteers held onto hope for him. “He knew where to find food, obviously, where to find shelter,” said volunteer Sue Strome. “I don’t know, maybe he did that in his life before he ended up in that shelter in Kansas.”

Then two weeks ago they finally got another lead. Linda Fetters looked out her front window and spotted a scruffy looking dog. “I knew that was him,” she said. She recognized Garrett from the fliers that had been posted. She immediately called Heinz. Fetters didn’t just call though she followed Garrett’s tracks through the snow trying to find him.

For ten days after Fetters first spotted Garrett in her front yard, she and Sue Strome searched for Garrett. They even caught glimpses of him, but he wouldn’t come to their calls. “When dogs are on their own like that, they get into a crazy mindset where they’re just surviving,” said Heinz.  So they started setting box traps for Garrett. They managed to catch two cats and a possum, but not Garrett.

Then last Friday Fetters left a trap out overnight and checked it at 6 am to find what she had been hoping for, Garrett. “I bent over and I was like ‘Well, hello!’ and he was like ‘Where’ve you been?” Fetters immediately knew she wanted to keep him. For over four-and-a-half months Garrett had survived on his own and now he has a new home and family with Fetters.