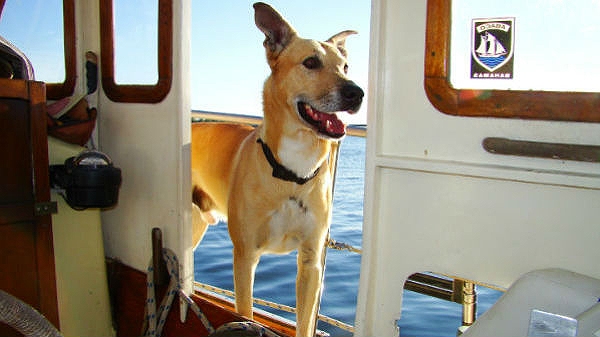 A dog named Dingo is the subject of an amazing tale of survival after he spent three weeks adrift at sea in an abandoned boat.

The Atlantic Animal Hospital in Wilmington, North Carolina is caring for Dingo after Nathan Moody, who lives in the Bahamas, found him drifting on the abandoned vessel. According to the Toronto Star, his owner, John William Batchelor, 72, likely died at sea while on an annual pilgrimage south. Investigators are still trying to locate his remains.

Nathan Moody is a volunteer with BASRA, a non-profit voluntary rescue organization. When he discovered Dingo alone on the boat, he said the dog was dehydrated and malnourished. He said he was so heartbroken by Dingo’s traumatic journey that he adopted him on the spot.

Dingo suffered a brief setback when Moody and Dingo were both attacked by wild dogs at his home in the Bahamas a few weeks ago. Dingo suffered injuries to his leg during the attack and was later sent to the US for treatment when local vets said his wounds were too difficult for them to address. Rob Moody, Nathan’s brother, is keeping an eye on him while he recovers.

Nathan Moody is in the process of moving back to America from the Bahamas, and said he can’t wait to be reunited with his lucky survivor in a few weeks.