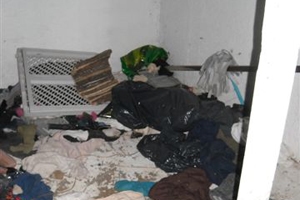 A Canadian couple found guilty severe animal cruelty has been banned for life from owning animals. The ban was prompted by a Hamilton-Burlington SPCA search of their home in 2010 in. Joseph Doe and Tammy Lynn Scott were charged with eight counts of animal cruelty after officers removed six pets covered with fleas, and found a dead ferret, plus several dead snakes, gerbils, rats and mice in the home. Animal excrement, garbage and other debris were strewn throughout the home.

To make matters worse, one month later the SPCA returned and removed an additional 28 animals, including six cats, two dogs, gerbils, mice and rats and several dead snakes. One dog had been so badly neglected that it had to be put down. Conditions were described as horrendous.

“These people failed on all levels of care,” declared Justice of the Peace Mitchell Baker. The couple also failed to attend the court hearing.

Doe and Scott were found guilty on one count of animal cruelty, but the judge suspended sentences on the seven other charges. He also slapped them with a lifetime ban on owning or even having temporary custody of any animal.

SPCA inspector Vivian LaFlamme said the ban will be enforced across the province, and that area organizations have been notified. Smith Falls animal control employee Laura Lowson said she has been involved in the case for some time, and plans to visit the property again – the couple must surrender any animals remaining in their possession to the closest SPCA shelter.

The ruling also requires that Doe and Scott keep the Hamilton-Burlington SPCA informed of their current address, and allow officers to inspect their property on a regular basis. They will also have to pay $4,230 in restitution.