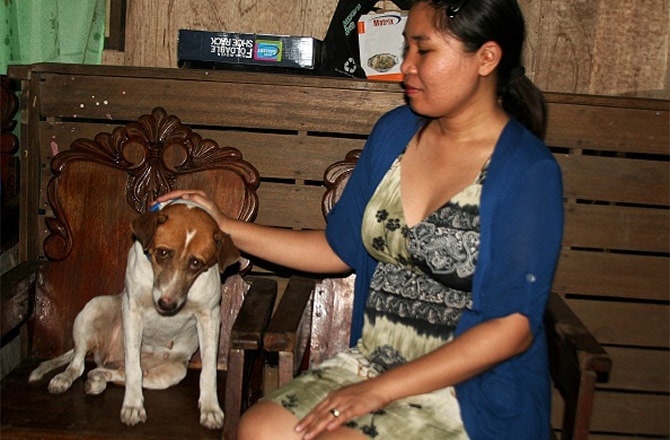 Bunny and her human mom Ailyn Metran are from the Philippines.  Last year, when Super Typhoon Haiyan struck the island nation with such ferocity, Bunny was lost in the chaos.  Now, after one year apart, Ailyn and Bunny have been reunited.

Ailyn says she never gave up hope for Bunny.

“I never lost hope. God saved Bunny from the storm surge, so why would he let her die afterwards,” Ailyn said to news outlets.

Ailyn and her husband actually came across this missing family member while in the central city of Tacloban last month.  Bunny was in rough shape, and was rooting through a garbage bin when they found her.  She was very malnourished, but alive, and very happy to see her human family again.

“We saw a dirty stray dog that looked like her. I called out her name and she came, asking to be cradled,” said Ailyn.  She says that her family fled their Tacloban home ahead of the storm, but were forced to leave three dogs behind.  Two of the dogs didn’t make it through the storm, but somehow, Bunny did.

About two days after the storm had subsided, Ailyn and her husband returned to what was left of their home.  They found Bunny there, alive.  Unfortunately, they were forced out again by the upheaval that quickly followed in the storm’s wake.

“For many victims who have lost nearly everything, their pets are important because they represent a semblance of their previous lives,” said Anna Cabrera. She’s the executive director of the Philippine Animal Welfare Society.