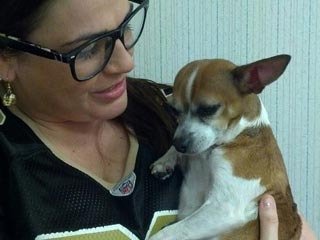 It was almost two weeks ago that Meg Hall was the victim of a carjacking. The carjacker not only stole her Lincoln Navigator, but her dog Skeeter who was inside the car. Skeeter is now safely at home after being found late Sunday.

On October 30th, Meg Hall was climbing into her Lincoln Navigator at her boyfriend’s mother’s house in New Orleans when a man armed with a gun stopped her from closing her car door. He yanked her away from the car, punched her in the face and threw her on the ground. As the man started driving away Hall pleaded for him to let her get her 11-year-old Chihuahua-Jack Russell terrier mix named Skeeter. The man drove off with Skeeter in the car.

On November 3rd, Hall’s car was recovered but Skeeter was nowhere to be found. Hall’s friends and family raised money to offer a reward for Skeeter’s safe return. The Humane Society of Louisiana also helped chip in for the reward. Hall had received several calls over the past two weeks from people who had found dogs, none of them were Skeeter. Thankfully, late on Sunday Skeeter was recovered and is back with Hall.

A Mid-City family was out walking their dog when they found Skeeter and contacted Hall. “They handed him to me and I was like, ‘Oh my God, it really is Skeeter'” said Hall. The family will receive a $4,000 reward from the funds raised. Skeeter is dirty and skinny but a vet says all of his blood work is good. Police are still looking for Hall’s attacker, but Hall still has a lot to be thankful for.“I’m so happy,” Hall said. “We have a lot to be happy about this Thanksgiving. We do.”