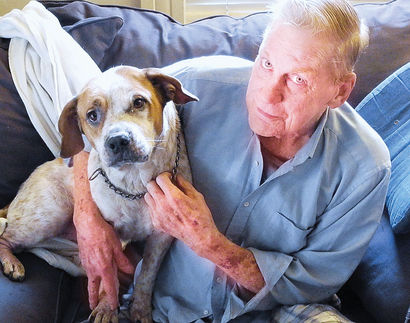 Stanley Davis was asleep on his couch when a fire came within inches of his face. Thanks to his dog Cleo, who jumped through flames to get to Davis and wake him up, he made it out of the fire alive.

Davis, a 68-year-old man from Parkersburg, West Virginia is on oxygen for health reasons. He usually sleeps on the couch or a recliner in his living room. Around 1:30 am on November 2nd a fire started in the living room. Davis didn’t hear the smoke detectors going off and wasn’t waking up. “I took a sleeping pill and when they knock me out, I’m out,” Davis said.

His dog Cleo came to the rescue when she jumped through the fire and onto the couch. “She started licking my face and it woke me up,” Davis said. “The flames were only 7 or 8 inches away from my face.” Davis awoke and began stomping on the flames. “If she hadn’t gotten me up, they would have caught this couch on fire,” he said. Davis and Cleo made it out of the fire safely. Davis rescued Cleo three years ago when he found her wandering the streets as a puppy. Cleo has now more than returned the favor with her heroic rescue of Davis.