Dog takes a truck, a ferry and a plane to reunite with her owners 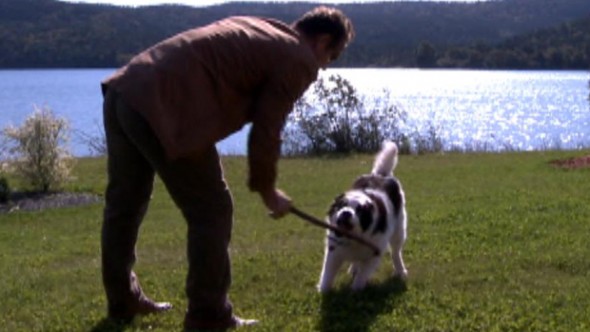 Robert Bradbury was at his cabin on Pinchgut Lake in Newfoundland with his wife and border collie Roxie. On Sunday night they were preparing for their trip back home to Corner Brook when gunshots went off, spooking Roxie. Roxie took off and the Bradburys could not find her. Bradbury’s wife stayed the night at the cabin hoping Roxie would turn up, but she never did.

On Monday, Bradbury received a call on his cell phone from a stranger, “He was a truck driver, driving an 18-wheeler, and at the time he was going through Antigonish with the dog,” said Bradbury. The driver had seen Roxie Sunday night on the Trans-Canada Highway. Roxie was running along the highway and the trucker pulled over to help the obviously distressed dog. Roxie had a dog tag on that said city of Corner Brook, so the trucker tried to contact city officials on Sunday night. No one was working so he kept Roxie with him as he continued on his route, which included taking a ferry into Nova Scotia.

Luckily, a family member of Bradbury’s was in Nova Scotia and went and picked up Roxie from the trucker after he was able to track down the Bradburys. It was then arranged for Roxie to fly from Halifax to Deer Lake. Roxie traveled by truck, boat and plane over two provinces before finally being reunited with the Bradburys on Tuesday night.