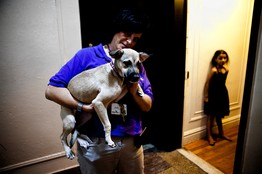 When people hear “Animal Control” they often conjure up images of uniformed dog catchers cornering animals with big nets and tranquilizer guns, but in New York City the reality is that animal control officers save thousands of lives every year.  And it’s not just dogs and cats, Mike Pastore, an animal-control expert with Animal Care & Control of NYC has been involved with catching everything from peacocks to pot bellied pigs to a Bengal tiger during his career, and he does it dressed in plain clothes and with a minimum of equipment, except for the case of the tiger, which he did not approach himself.

In the case of the tiger, it had been left alone and unfed for 3 days in an apartment in Harlem in 2003.  After receiving a tip that the animal was there, police and animal control went to the apartment and heard nothing.  But after drilling a hole through the door a scope revealed the hungry and aggressive tiger inside.  A police officer rappelled down the side of the building and shot the tiger with several tranquilizer darts.  Eventually the beautiful beast was transferred to a sanctuary in Ohio, to enjoy a much more pleasant life that he richly deserved. 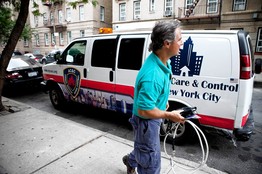 Animal Care and Control is often confused with the ASPCA (American Society for the Prevention of Cruelty to Animals).  It is a nonprofit that has been under contract with the city since 1995 and takes in about 35,000 animals per year.  Most of those are adopted out, placed with another agency, or claimed by owners.  Based on population, New York City has the lowest rate of euthanization in the US.

When asked about the danger of dealing with aggressive animals, Animal Care & Control’s executive director, Julie Bank, said the greatest threat in such situations isn’t the animals but hostile crowds, and Mr. Pastore agreed. “They go into areas and get called names, get bottles thrown at them,” she said of her staffers.  Pastore’s goal is to be calm and not upset or stress the animal further, and indeed in his career he only recalls being bitten once.

“Everybody has an opinion how to get the animal,” Mr. Pastore explained, returning to the subject of how best to subdue them. “You have to perform in front of a lot of people humanely and safely. You have to dance around all that, then explain to the people what you’re doing.” At the end of the day, a great many animals are saved and provided with better, happier lives thanks to Animal Control’s excellent team of dedicated and compassionate officers.