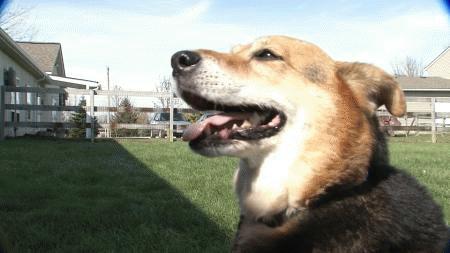 Eight years after Hurricane Katrina hit the Gulf Coast one of the survivors is still looking for a home. Trina is a nine-year-old German Shepherd mix that was rescued from the streets of Gulfport, Mississippi in the aftermath of the storm. Unfortunately after all this time she still hasn’t found a home.

Trina was found after the storm and along with 15 other dogs was brought to Delaware County, Ohio. Many of the other dogs were reunited with their owners, but for Trina no owner was ever found. Not only was no owner ever found, but she never found a new one either and has spent the last eight years living in a Delaware County shelter.

“Trina is the one dog who has fallen through the cracks,” said rescuer Michael Spitale. “We want to do the best job we can finding her a home now that she’s nine-years-old, so she can wind time down in a nice loving home.”

Trina gets along well with other dogs and cats and loves being around people.

“To be here as long as she has been here, and to be as loving as she is, there’s something about her,” said Spitale.

Anyone interested in adopting Trina should reach out to the following email address:  [email protected]