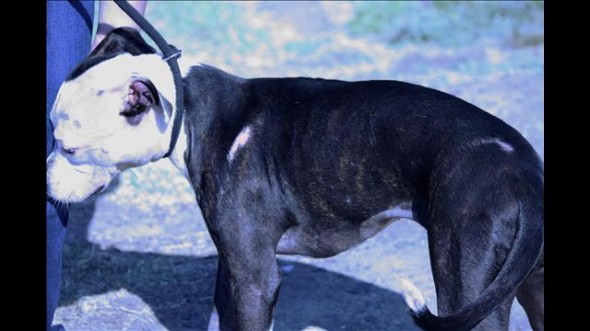 A dog that was rescued after being thrown from the back of the pickup truck in California is now going to a new loving home.

On July 15th the one-year-old pit bull, originally named Tundra by the Placer SPCA, was seen riding in the back of a black pickup truck. As the truck approached an intersection it slowed for a yellow light and then sped up to beat the red light. This acceleration caused Tundra to hit the tailgate and flip out of the back of the truck and into the road.

“I thought she was dead,” said Jenny Pfitzer, who had been driving behind the truck. “I didn’t think it would make it.”

Tundra was brought to the Placer SPCA. She was skinned badly and in shock, but was able to recover well. As Tundra recovered the SPCA worked on finding her a good family. Her new family fell in love with her loving and sweet personality. They have renamed her Ruby.

Placer SPCA encourages anyone who sees a dog in a pickup truck that’s not secured properly to call authorities.