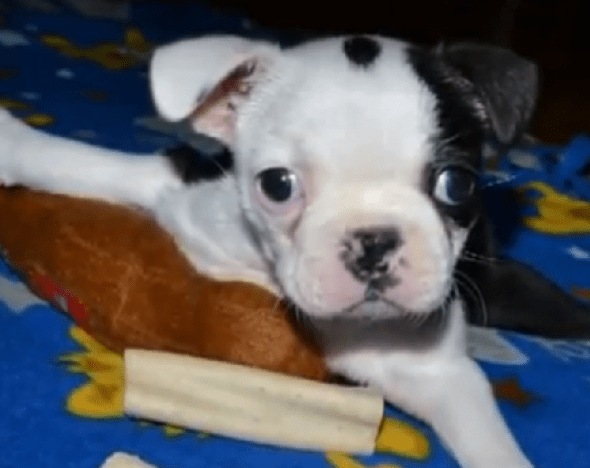 When Mick was born the chances of him being able to walk were slim due to a condition known as “Swimmer Puppy Syndrome.” Mick beat the odds though with the help of The Mia Foundation and is now able to walk, something no one thought was possible.

Mick was born in Oklahoma and it became obvious to his breeder that something was wrong. The Boston terrier had a condition formally known as pectus excavatum, or “Swimmer Puppy Syndrome.” It is a birth defect where dogs are born with flat chests and abdomens which cause their legs to be splayed.

“Ninety percent of all animals born with birth defects are euthanized at birth,” said Sue Rogers, founder of The Mia Foundation. “They are a lot of work and sometimes are very expensive, so sometimes people think it’s just easier to put them down.”

Mick’s breeder gave Mick a chance when he sent him to The Mia Foundation, a nonprofit organization in Rochester, New York that focuses on helping animals born with birth defects. When Mick arrived at the Mia Foundation they weren’t sure what they were going to be able to do to help him, but they were willing to try.

“The minute she handed me that puppy I just wanted to cry because I didn’t think there was any way possible to help this dog,” said Rogers. “And you can’t tell from the picture how flat [he was].”

Rogers started researching the condition and reached out to veterinarians for help, but didn’t get very far. Mick was stronger than anyone gave him credit for though. Rogers began therapy sessions with Mick four times each day to help him build muscle strength.

“It was a little frustrating at first, but I’m persistent,” said Rogers. “Finally one day he just took off.”

Mick soon began making progress, first swimming, then sitting up and standing and finally Mick did what no one thought was possible, he began to walk on his own. Now Mick can not only walk, but he runs. His amazing recovery was documented in the video above.

Mick will be available for adoption in a few weeks. For more information about The Mia Foundation, visit their Facebook page.

0 thoughts on “Puppy Beats the Odds and Learns to Walk”