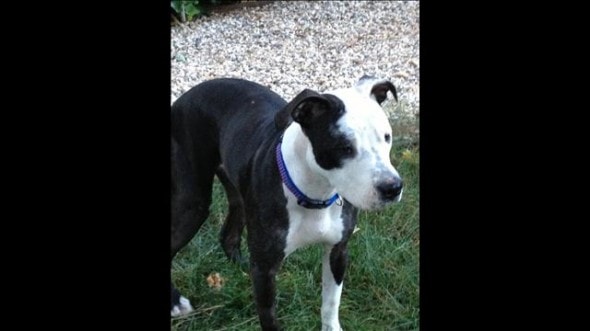 A young pit bull has found a loving home after being ejected from a truck speeding through an intersection in Roseville, California.

The truck Tundra was riding in began to slow down as the light turned yellow, but then the driver accelerated. The sudden acceleration caused Tundra to fly out from the flatbed. She hit the ground hard and rolled nearly 100 feet.

“It only stopped after it hit a light pole … I thought he was dead … I didn’t think it would make it,” said Jenny Pfitzer, who had been right behind the truck.

She tried following the truck, but lost it. Another woman stayed with the dog until animal control arrived. Unsurprisingly, the truck did not return. Tundra was taken to Placer SPCA, where she was named.

Placer SPCA CEO Leilani Fratis said even though she was somewhat skinned-up, the one-year-old dog did not suffer any broken bones. She does not seem to be traumatized by her ordeal.

Fratis worries about every dog she sees in the back of a truck, even if it is tethered. They can easily fall over the side and choke or be dragged to death.

“The law is clear,” she stated. “Dogs have to be in a container – like a crate – or cross-tethered with two leashes or restraints. One is not enough because a dog can still be thrown from the truck.”

Now Tundra has been adopted into a new home, where she has been renamed Ruby. The family fell in love with her sweet personality and had to make her a family member. Her days on a flatbed are over, and she can just spend the rest of her life being happy.