On June 4, 2014, firefighters rescued an eight-month-old, brown brindle Bullmastiff from under a ferry dock that links mainland Toronto with the city’s island airport. The trapped dog was discovered by constructions workers on their way to work. 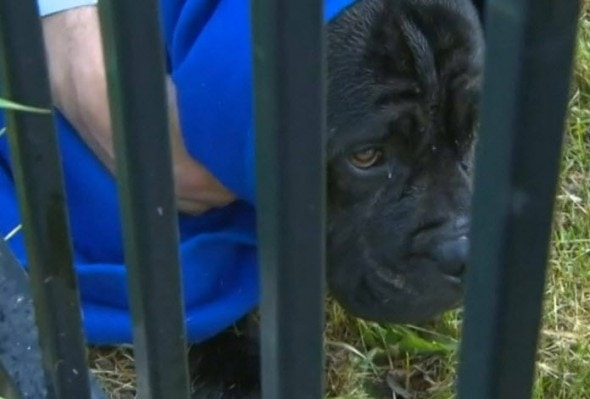 It was 6 a.m. when the men walking to work heard the dog whimpering. They followed the sound and discovered the large breed pup trapped under a ramp at the car launch on the city side of the Billy Bishop airport ferry terminal. Authorities were contacted and 30 minutes later the canine was rescued.

“We had to use the Jaws of Life and some prying bars to lift (the grate) off,” Fire Chief Sylvain Theriault told CTV Toronto.

No one knows how the dog became trapped under the grate, but authorities believe the canine probably swam from somewhere in the city.

The dog was taken to Toronto Animal Services and scanned for microchip, but unfortunately he didn’t have one and he was not wearing a collar with ID tags. Authorities placed him under a five-day hold, hoping his owner would come forward and claim him. However, as of today, the Bullmastiff is still waiting for his family at the shelter.

The dog is now available for adoption. If you are interested in adopting the pet or if you know who this dog belongs to, please contact City of Toronto Animal Services South Region at (416) 338-6668. Ask for information about animal ID number A680295.

3 thoughts on “Dog Trapped under Ferry Dock Is Rescued”