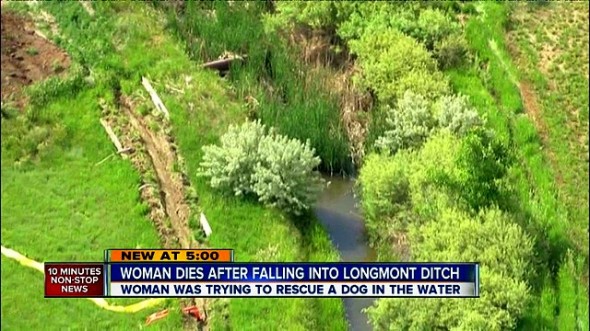 A Colorado woman’s life was taken when she jumped into the fast-moving water of an irrigation ditch to save a dog who had fallen in.  The dog is doing fine.

According to Heidi Prentup with the Boulder County Sheriff’s Office, a call came in at 1:30 pm, and deputies responding four minutes later arrived to find the woman’s friends performing CPR on her after pulling her from the water.

The victim, 31-year-old Megan Davis, was taken to Longmont United Hospital, where she was officially pronounced dead.

“Witnesses indicated the woman, who was visiting friends in the area, went into the fast-moving water in an attempt to save a dog who had fallen in,” Prentup said in a statement. “The dog was rescued and is doing fine.”

“Water in irrigation ditches and creeks is running very high and fast at this time of year. Please use extreme caution around the waterways and do not go into them without safety equipment.”

Capt. Randy Evans said dog owners try to save their pets from waterways, but that they shouldn’t risk their own lives.

“Ninety-nine percent of the time the dog gets out and the owner is in there struggling, so stay out of the water and let (rescuers) go in,” he said.

(Yeah, try telling someone not to go after their child who has been swept away!)

“Water on the top surface looks fine, but underneath that you’ve got a lot of moving water so as you jump in the undercurrent will suck you under,” he concluded.