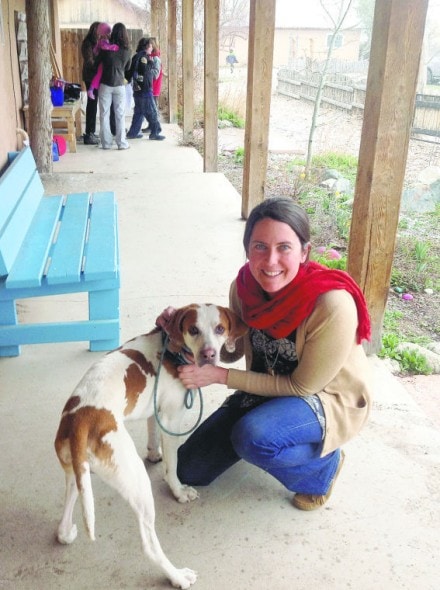 When Sarah Beasley first me Indy he was skin and bones. A little research and Beasley discovered the incredible journey Indy took to find his way to her.

On February 13th Indy came into eight-grade teacher Sarah Beasley’s life when he walked into her classroom at the Taos Waldorf School in New Mexico. “He showed up right at this classroom on Feb. 13,” she said. “He came in and just sat down in front of me. He was skinny and dirty, and clearly had gone through rough times.” The dog appeared to be a stray but was very friendly with Beasley and all of her students. “He was so happy, wagging his tail and following me around,” said Beasley.

Although Indy and Beasley had an instant connection Beasley wanted to make sure there wasn’t someone out there looking for him. There was a phone number on his collar and Beasley made the call. The man on the other line wasn’t Indy’s owner but for a dog breeder in California. “The guy was baffled when I told him that the dog had showed up in Taos,” said Beasley. “He told me that he had sold him to a hunter from California seven month before so we assumed that the owner was hunting somewhere nearby and had just lost the dog.”

The breeder reached out to Indy’s owner and discovered the real story. Indy’s owner had died in a hunting accident in Arizona 36 days earlier. Indy had gone missing after the accident. Using Indy’s GPS collar the breeder discovered that Indy had traveled over 972 miles, crossing the border between Arizona and New Mexico three times. Indy had returned to the scene of the accident on several occasions.

The GPS box had eventually fallen off so Indy likely traveled much further. “What we know for sure is that he was lost for 36 days,” said Beasley. “And had to fend for himself all that time. No wonder he was all skin and bones.” The breeder talked to Indy’s owner’s widow and she asked him to find Indy another home. Beasley was happy to keep Indy and understood the widow’s request. “She had just lost her husband, had a 5-year-old child and number of other dogs to take care of. So…I decided to adopt him.”

Indy and Beasley easily settled into their new life together. “Everything just fell into place,” said Beasley. Although she didn’t previously have permission to have pets at her resident she was able to gain it and she brings Indy to school with her where he often sits under her desk. Indy is doing well too. He’s already gained 10 pounds back.