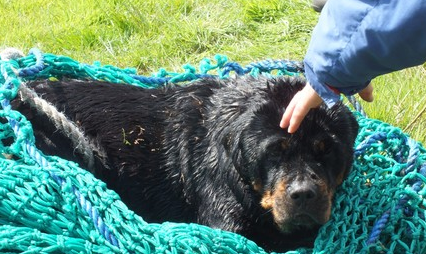 For twenty-four hours Maddie had to tread water to stay alive. The three-year-old Rottweiler had fallen down an 80-foot mine shaft and wasn’t found until the next morning.

Nick Lake was walking Maddie in Camborne, England when she disappeared. Lake frantically searched all around for her, but had no idea that she had fallen into a disused mine shaft.

“I searched the area but couldn’t find her,” said Lake. “It was so windy I couldn’t hear anything.”

Unable to sleep that night Lake returned the next morning to where Maddie had disappeared and heard a faint whimpering. It was then he realized Maddie was at the bottom of the mine shaft and had been treading water the entire time.

“I was calling her name for ages and eventually I had Maddie’s whimper in the distance,” said Lake. “I kept calling her and eventually came across an open mine shaft. It was too far down to see, but I heard her respond to my call.”

Lake quickly called for help and a team of 19 firefighters arrived on the scene to rescue Maddie. The firefighters lowered a cargo net down the shaft to reach her and it then took two men to lift her to safety.

Everyone was shocked that Maddie had been able to stay afloat for an entire day. Although she was cold from the ordeal she was otherwise doing well. Lake plans to try to have barriers put up around the mine shaft to prevent something like this happening to other dogs.

“Maddie’s a lucky dog,” said Lake. “I certainly don’t think I could have kept swimming for 24 hours.”