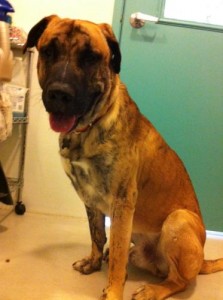 It is well known that many animal shelters are overcrowded and underfunded, leading them to resort to killing animals to free up space. However, the killing is not the only problem with these shelters. Often, the crowding and lack of attention can cause behavior issues in even the most well-adjusted dogs.

Turtle’s story begins at such a shelter, where too many other dogs’ stories end. Turtle, a Mastiff, was given up by his family to the local shelter. His prospects of finding a home were looking increasingly dim. It was not until the very day that he was scheduled to be euthanized that he encountered the people that would help give him a second chance. Some representatives from the organization Felines and Canines (www.felinescanines.org) were at the shelter, searching for pets to rescue. Felines and Canines work in the Chicago area to rescue both cats and dogs from high-intake shelters. They then rehabilitate them and place them in homes.

According to Development Director Kelly Thompson, Turtle was traumatized.

“We went back to his cage and he was literally frozen like a statue and shaking so hard that his teeth were chattering. We sat down and I could tell from looking at him that he didn’t have an aggressive bone in his body.”

It took Thompson and the others she was with 25 minutes to coax Turtle out of his cage and out into the main area! When they got there, he just stuck his head behind a plant, urinated and tried to hide. They realized that Turtle desperately needed a change. However, would Turtle turn out to be too scarred to be functional? Thompson did not know what to expect, but wanted to give Turtle a chance:

“We didn’t know what 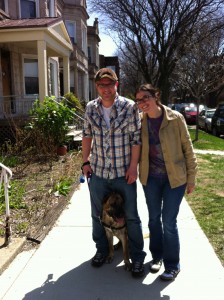 would happen and how long it would take us to make a difference. We weren’t sure about his temperament or what the future would hold, but you can’t come back from euthanasia. He deserved a shot.”

As soon as Turtle arrived at Felines and Canines, he began to show improvement. Within a week, he seemed to be a completely different dog-sweet, social and friendly. The staff found that he loved to be with other dogs, as well as with cats and children.  He found his forever home within weeks, with a loving family that had previously adopted two cats from Felines and Canines.

Felines and Canines, Inc (www.felinescanines.org) started in 1977, originally rescuing Chicago area cats. They only recently expanded to include dogs, adding several dog suites. The new space gives dogs a roomier and brighter place to live while waiting for new homes. Volunteers also work with them to get them ready for adoption.