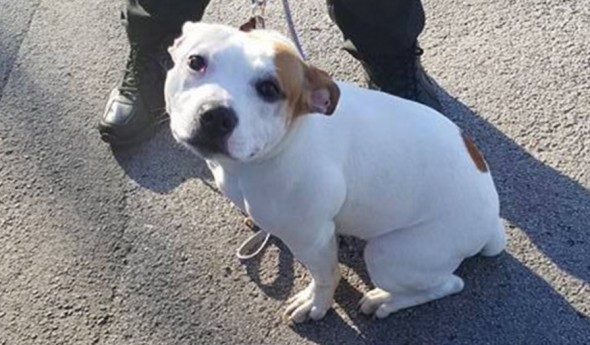 Pepper, an 11-month-old Staffordshire bull terrier decided to wander away from home, and got lost.  So what is a lost dog to do?  Why, take the bus home!  Right?

Unfortunately, Pepper didn’t have enough to cover the bus fare, and dogs aren’t exactly allowed on the bus in her home town anyway.  The bus driver called the city council’s community protection team, and had the dog taken off of the bus.

The community protection team took the time to find out who Pepper was, and to what family she belonged to.  Pepper was safely reunited with her family, and all is well.

“This was the first time she had ever got out on her own before.  We spent a couple of hours searching and my son was really upset,” said Pepper’s human.  “Apparently she had wandered about half a mile down the street, waited at the bus stop and tried to get on when it pulled up.  We think she got lost and just wanted to find the way home.  When she was brought back she was really happy and we were relieved.”

Pepper’s family was relieved to have her back, and even though the mean old bus driver called the “coppers” on Pepper, he did wait with her until her humans came by to get her.  So in the end, we guess he’s not all bad.