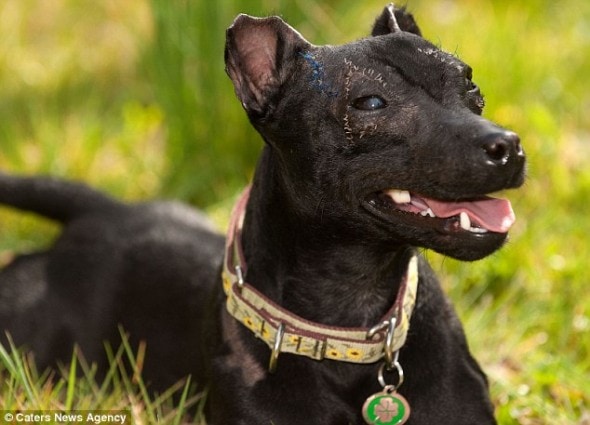 Delilah was near death, covered in burns and bites from being used as badger bait, and suffering from hypothermia when she was found by dog walkers.  She was unconscious and malnourished when they brought her to a nearby veterinarian on January 17th and it is a miracle that she is alive at all.  She is now on the long road to recovery thanks to some doctors who would not give up on her.

Julie Fox, a nurse at the hospital where Delilah was brought said “Her face was peeling off and there was blood everywhere, if she was brought in with her owners we would have administered euthanasia straight away.”  Badger baiting is an illegal “sport” in which fires are started at all but one of the exit holes of the badger sett and dogs are sent down to chase them out.

Delilah was wrapped in foil blankets, surrounded her in heat pads and given her a hefty helping of dinner, and within hours she had regained consciousness and was able to sit up.  Later she had surgery to replace her eyelids which left her with 80 stitches, and a new owner.  Julie Fox decided to adopt the 18-month-old Patterdale Terrier, giving her the safe and home she so badly needs right now. 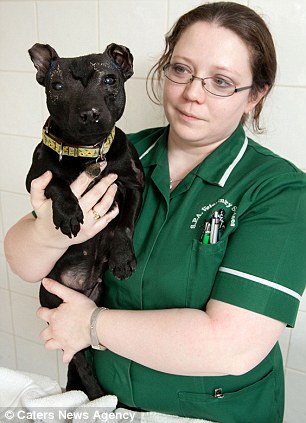 She said: “I’m a sucker for a sob story and I’d recently lost a dog of mine so I wanted to take her home – if I didn’t then umpteen of my colleagues have volunteered to do the same.  Since I’ve had her at home she’s made a remarkable recovery.  She’s full of life, she follows me everywhere and loves playing with my other dogs.”