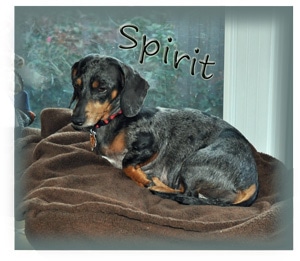 Spirit earned her name through the way she approached life and mothering her puppies despite many difficulties. Her spirit prevailed and her story has a happy ending.

Spirit was rescued along with her puppies by Diamond Dachshund Rescue (DDRTX) of San Antonio, TX in 2011, after she was left at a Texarkana shelter, pregnant, heartworm positive, and with poorly healed fractured leg.

As determined and devoted to duty as she was sweet, the little Mama was named Spirit by her rescuers.  She raised her puppies until their adoptions, endured heartworm treatment, and remained spirited and upbeat after having her injured lag amputated.

Spirit was adopted into a loving home in May of 2012.

Note: Spirit’s leg was amputated, on the recommendation of her specialists, after this video was made. The organization is no longer seeking funds on her behalf, but continues to help other dogs in need.)

We are sharing Spirit’s story today in honor of another dog, DDRTX permanent resident and awareness spokesdog Mandy May, who passed away today after a long illness. Goodwill ambassador Mandy May McIntyre, along with her co-spokesdog Rainbow Diamond, promoted DDRTX and Dachshund rescue both locally, through public appearances, and internationally through their presence on social media. Rainbow was rescued from a puppy mill and required extensive rehabilitation. Her role with DDRTX is as an anti-puppy mill awareness advocate.

For more information on this organization, visit Diamon Dachshund rescue at their  DDRTX.org website and Diamond Dachshund Rescue of Texas at Facebook