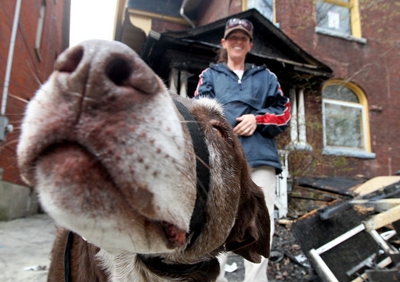 As she set out for a walk with a client’s dog Tuesday, Traci Healy had no idea she would end up a hero by the end of their stroll.

The professional dog walker was with one of her client’s pets when she saw smoke coming out of a house on Albany Ave. in Toronto. In an interview with the Toronto Sun, Healy said, “I instinctively ran to the house and called 911. Then, I tied my dog up and ran to the front door where the fire was burning and rang the doorbell and banged on the door, but there was no answer.”

Healy then removed garbage and furniture from the front porch to keep it from catching on fire as flames began to engulf the home.

“I threw a cup through the window, but I didn’t hear anybody and I couldn’t open the door because the flames got too hot. Then I heard someone shout, ‘I’m here,’ so I ran to the back of the house and found a disoriented woman in her 20s on the ground floor,” Healy told the Sun.

After helping the woman to escape the home she ran to a second floor apartment to alert other residents to the blaze. “I was banging and screaming to get out and this couple answered. The guy didn’t believe me and I kept screaming at him to leave. Then, he looked outside and saw the flames coming up the side of the house,” Healy said. “People thought I was crazy. It was surreal. I was just really worried there were people trapped inside.”

Toronto Fire District Chief Stephan Powell told The Sun that the one-alarm fire caused $45,000 in damage to the outside front porch of the house, and that the cause of the blaze was under investigation.

An interesting note: Healy said it was unusual for her to walk in that neighborhood since she normally takes an alternate route. “It’s a coincidence, but I was at a funeral on Saturday of a family friend named John who had once rescued someone from a burning house. I would have done it anyways, but I think he somehow guided me there.”