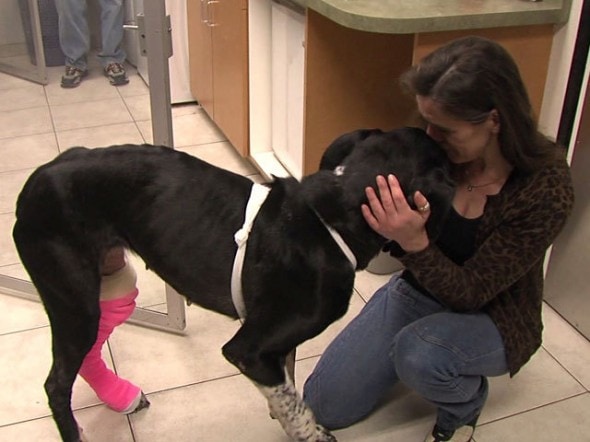 When Lori Schwab’s house went up in flames she was certain that along with all her belongings her beloved dog Spyder was also gone. Spyder proved her owner wrong when San Diego firefighters brought Spyder out of the fire and used an oxygen mask to save her life. Schwab lost all of her belongings in the fire but is comforted by the fact the most important thing to her, Spyder, was saved.

On December 27th Schwab’s Ocean Beach, California home was destroyed by a fire. At the time she was certain her dog Spyder didn’t make it. Then San Diego firefighters brought out the 4-year-old dog and one of them put his oxygen mask on her. Spyder beat the odds and was transported by police to a nearby veterinary hospital alive.

Although Spyder was alive she was not out of the woods. “She had third-degree burns over about 25 to 30 percent of her body on her left side,” said veterinarian Dr. Jenny Schiebert. For weeks now Spyder has been recovering from her severe burns and doing so bravely. “Not once did she ever whimper, whine, growl, lift a lip…she is just a loving soul,” said Dr. Schiebert.

Schwab has been able to visit Spyder as she recovers several times, and it is still an emotional experience. “I knew she was dead…and here I am sitting with her, you know?” Schwab said tearfully. The simple joy of being able to take Spyder for a short walk in the back of the hospital is a great comfort to Schwab who lost all her belongings in the fire.

Spyder’s recovery will be a long and expensive one. She has already undergone five surgeries and her care has already reached, and is expected to exceed, $20,000. Anyone wishing to help with the cost of surgeries can do so through Spyder’s ChipIn fund.