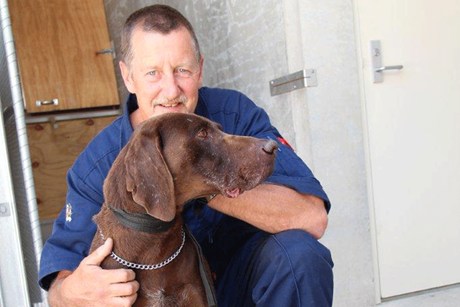 Oscar the three legged dog became famous around the world last week after being caught on video stealing pet food food rolls from a local dairy.   He was ‘arrested’ after being repeatedly caught by the owner of the dairy and was sent to the pound.  No one could be mad at Oscar though, as he is so sweet and lovable, and many offered to adopt him.

Now his family is back from their vacation and Oscar has been set free from the pound to return home.  They reside in Invercargill, New Zealand and so normally Oscar lives out in the country with plenty of room to roam.  But while his family was away he was staying in town with relatives who apparently did not have a dog proof yard.  After Oscar escaped to rob the dairy for the second time, he was put under lock and key until he could be reunited with his owners.

His owner, who has asked to remain anonymous, is very relieved to have his boy back.  Oscar, who is a ten year old german short haired pointer, seems none the worse for wear for his adventures and time at the pound and said “He was happy enough, bouncing around his three legs.”
.