When Treya’s owner was killed, no one rescued her, so she spent the next five years chained up under the deck of the abandoned home.  Neighbors fed her, but no one bothered to call animal control.  The chain got itself wrapped around her paw so tightly that she gnawed her foot off to free herself, but she has since been rescued and is receiving lots of love – and hopefully soon, a new foot.

It is truly mind-boggling that not one person in five years called to have Treya rescued when her owner was murdered.  But at the very least, her St. Louis neighbors provided her with food and water, and straw to help keep her warm in the winter. 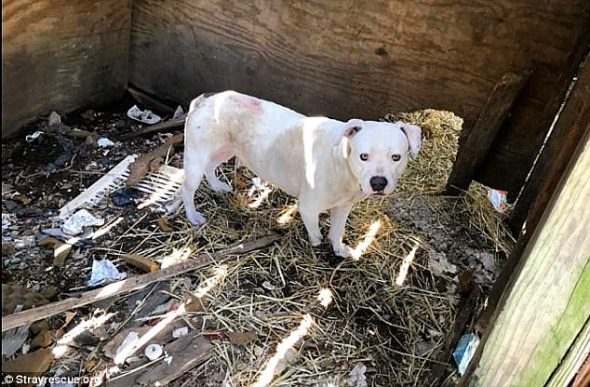 At some point, the chain keeping her bound to her open dungeon became tightly ensnared around her paw, causing her so much pain that she chewed it off.  When police were finally called, Stray Rescue of St. Louis was contacted to take her in and get her the medical care she needed.

“Rescuing her wasn’t easy. She feared humans from lack of socialization being isolated in her own private agonizing world,” Stray Rescue said.  “Donna eventually was able to rescue the elusive and terrified white terrier.” 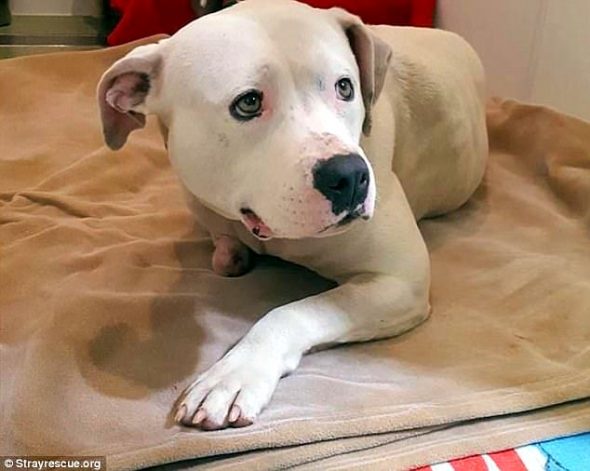 In addition to the paw injury, she was loaded with fleas and found to have a major heartworm infestation, all of which will cost over $3,000 to treat (including a prosthesis).  She will also need a lot of emotional rehabilitation.

“Her emotional wounds matched in intensity of her physical ones,” the organization explained.  “Sometimes healing the heart requires a friend, and friends can come in small packages. Little Pinky – another stray and all of 15 pounds – took Treya under his wing. The joy and tail wags of their friendship jumpstarted her broken heart.”

She’s now being cared for in a medical foster home, being given all the love and physical comfort she’s been lacking for so long.  Hopefully she will land herself a permanent home soon.

If you would like to help Treya get all the medical care she needs, as well as a prosthetic foot, please click here and scroll to the bottom. 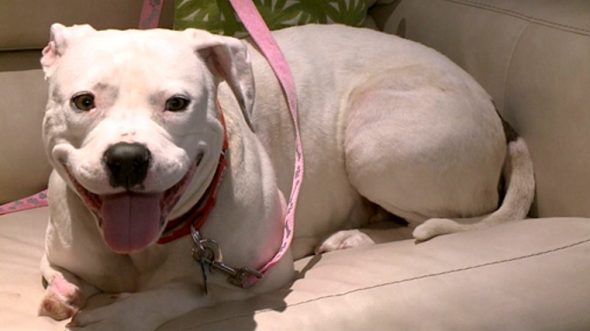