Dog who fell from a balcony getting around on new wheels 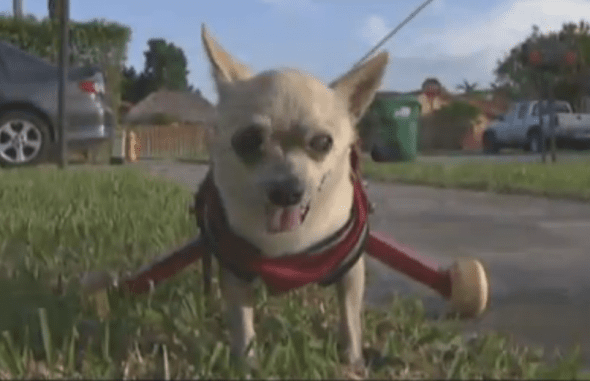 A little Chihuahua named Nene survived a terrifying fall from the fifth floor balcony of his North Miami apartment. The fall left his hind legs paralyzed. He could no longer walk and run like he loved to do. Now thanks to the nonprofit Tico’s Pawket and a man in California who makes doggie wheelchairs, Nene is getting a chance to run again.

The person watching Nene accidentally left the door to the balcony open. Nene was able to go out on to the balcony unsupervised because of this, and ended up falling five stories to the ground below. Nene’s owner, Martha, got the frightening phone call that her little dog had fallen and rushed to get to him, “I went crazy. I was crying all the way down the expressway, saying ‘God, don’t let him go before I get there. Let him be alive.’” Nene was alive, but suffered a severe injury leaving his back legs paralyzed.

In order to get around Nene has to drag his back legs. Even though it was difficult to watch him struggle, Martha couldn’t bear the thought of putting him down. She was able to find help for Nene from Susan Soltero.

Soltero recently started a nonprofit called Tico’s Pawket. The nonprofit’s mission is to help pet owners who need financial help. “For any family that has an animal that has a problem, that has a medical condition, that they may not be able to financially take care of, we provide help for those people who really love their animals and want to keep them, “ Soltero said. Nene is the first animal Tico’s Pawket has helped.

Soltero got in contact with a man in California who makes wheelchairs for dogs and helped raise the funds to cover the cost of having one made for Nene. The new wheelchair has finally arrived for Nene and he’s adapting to it well. Martha is so happy she didn’t give up on her Nene and grateful for Susan’s help, “He is going to live a normal life again. Thank you. Thank you, Susan.”