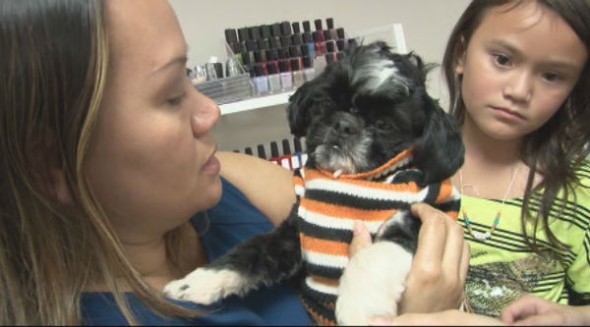 On October 8th Tina Caton, her two daughters, her niece and her dog Champ were in a car accident. A frightened Champ fled the car crash and went missing for two weeks before being reunited with the Caton family.

Rainy weather contributed to the Caton’s car flipping on Interstate 64 in Virginia. Luckily no one was seriously injured in the crash. Everyone was very frightened, including Champ, a nine-month old Shih Tzu. Champ fled the crash, making his escape through the shattered sunroof. Champ had been kept in a carrier, but had started fidgeting. Minutes before the crash the girls took him out of the carrier. A mistake Caton plans to never make again.

For two weeks the Caton family tirelessly searched to find Champ. Caton went back to the accident spot twice a day everyday searching the nearby area for him. The family posted flyers and the Caton’s received numerous calls reporting sightings of Champ. “They said he was sitting right on the median, where the accident happened. He just sat there wagging his tail, and waiting,” said Caton.

Finally, on Sunday Caton and her husband spotted Champ near where others had seen him repeatedly. They finally were able to catch him and bring him home to safety. Caton held champ close and wept, “I saw tears coming out of his eyes. I wiped them and said, ‘It’s okay. Mommy got you, and I’m not going to let go anymore.”