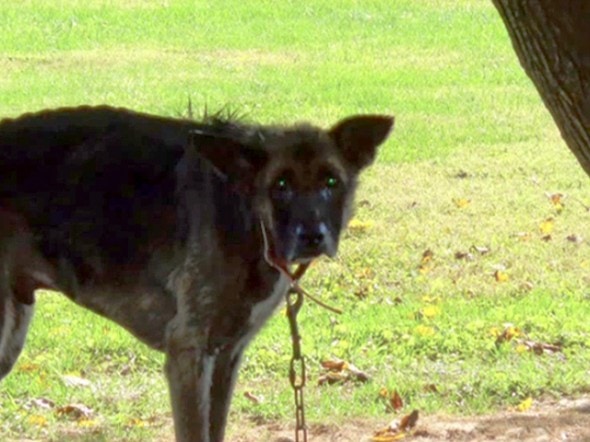 An Ohio man was charged with animal cruelty for keeping his German Shepherd chained to a tree for four years.

The dog, who was originally named Toby by owner Jeremy Shane Temple, has been renamed Joseph in tribute to the biblical man who was left for dead and later became an Egyptian ruler.

Middletown police and volunteers from the Public Animal Welfare Society found Joseph with very little food or water. He had been starved, weighing only half of the 100 pounds that would be normal for him.

PAWS volunteer Meg Melampy said he is missing teeth from eating bricks and rocks out of desperation, and has heartworm and a serious ear infection. He was also being devoured by fleas.

“When I gave him a bath, the blood just ran off of him,” Melampy said.

Officers said witnesses had seen Joseph tied up outside, and believed he was sick.

“They told us that it was a disease that he had,” neighbor Ron Allman said of the Temples’ explanation.

When Jeremy Temple was arrested, a family member asked Allman to vouch for them and say the dog hadn’t been abused.

“She wanted us to write a sort of note…that we never saw anyone mistreat the dog…so we did,” Allman said.

When Temple was asked about the dog’s pitiful condition by the arresting officer, he responded, “the dog is not a human.”

He was fined a mere $25 for the abuse, hardly a punishment, and is due in court on October 14. It is unknown if he will face a harsher penalty.

Joseph is expected to make a complete recovery, and will hopefully find himself a good home.