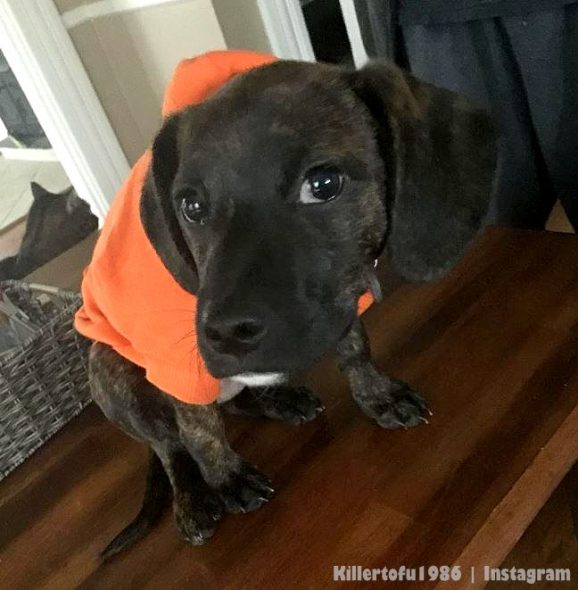 Poor Rizzo.  All he’s ever wanted is for his piggy siblings to play with him, and they just can’t be bothered – it seems they’d rather hang out in the barn instead of in the house.  But recently, Rizzo’s mom adopted another pig, and he is much happier inside, playing and snuggling with his new doggie brother and best friend.

“I have the other pigs outside in the barn,” Whitney Chiong told The Dodo. “When I go out there to take care of them, Rizzo tries to play with them. And they’re just like, ‘Uhhh … no. What are you doing?’” 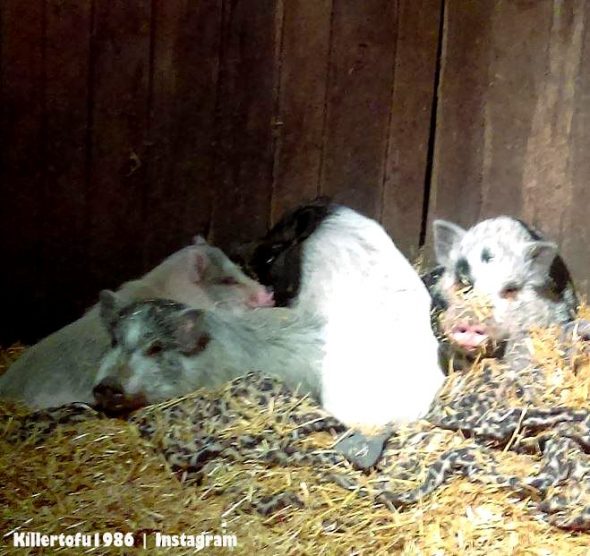 They could have been house pigs, too, but there’s so much more for them to do on their 10-acre plot in Morrow, Ohio, so they’ve decided to be barn pigs instead.

“The other pigs want no part in being house pigs anymore.  They have all this land to root up and explore.” 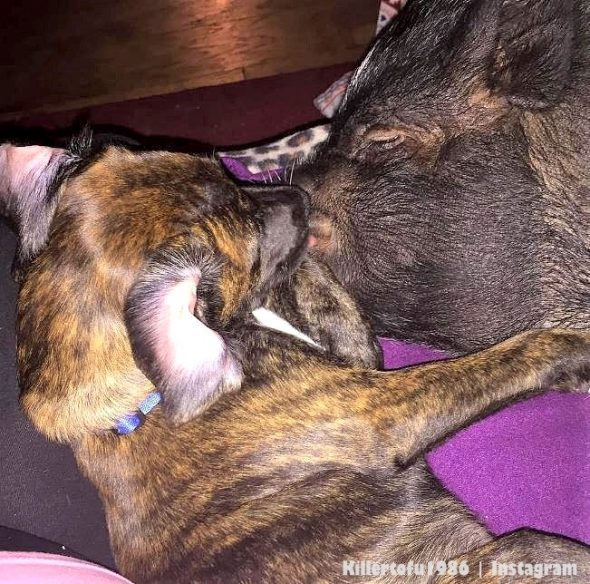 Boomer, Jonesy, Mo, and Opal want no part of being friends with Rizzo, either.  And the three cats just won’t cut it – Rizzo wants a porcine playmate.  Fate smiled on him recently, because two weeks ago a pig needed to be rehomed, so Whitney took him in.  As luck would have it, Calvin took to Rizzo like a duck to water.

“Rizzo tried to play with him – they chased each other through the house,” Whitney said. “They were best friends from the beginning. They are inseparable…. Calvin is a super couch potato, spoiled rotten, super cuddly guy.” 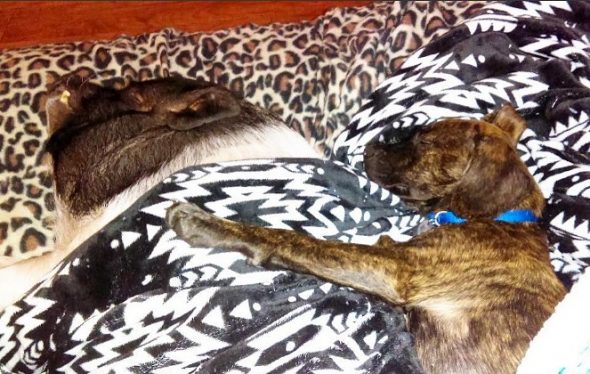 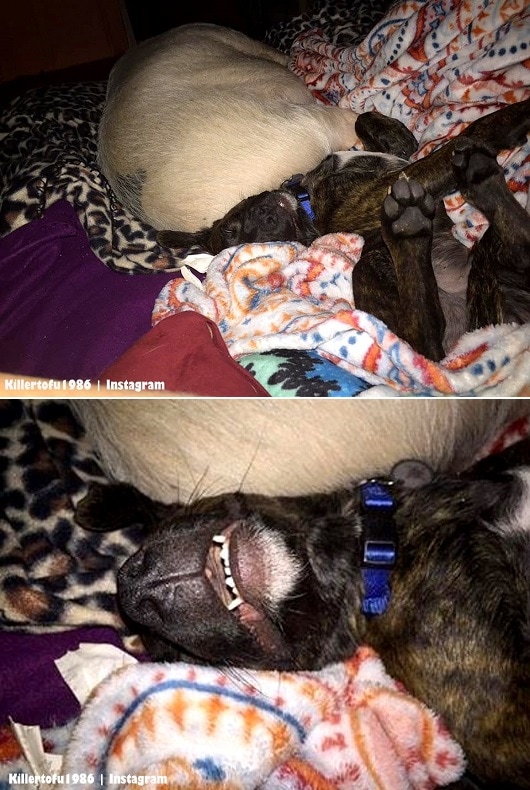 She has been dedicating her life to saving pigs and enlightening people to how intelligent and emotional they are.  They make excellent therapy animals.

“I struggle with anxiety and depression amongst other things,” Whitney confessed.  “My pigs have helped me tremendously through some terrible shit. I’m forever indebted to them.” 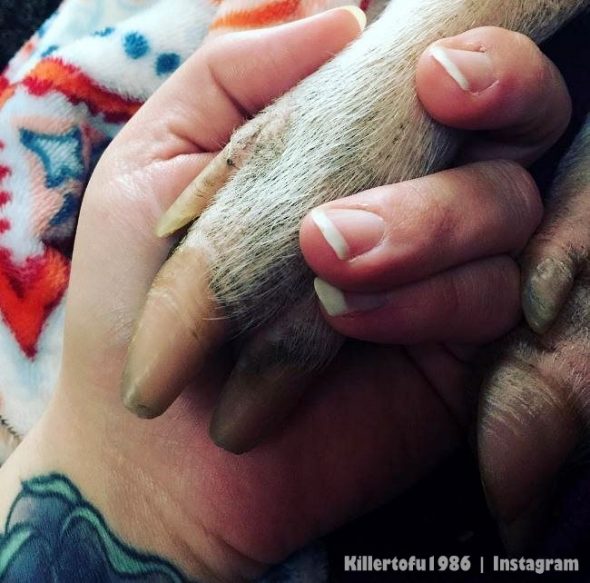 Lately, things have taken a turn for the worse.  Whitney was fired from the medical corporation she was employed by for making a stand against “some questionable practices.”  Calvin has been a tremendous comfort to her, and it seems that he even shares her pain.

“I’ve been really emotional and stressed and he’s been right by my side since the day we got him,” she explained.  One day when she was crying, “I was petting him and felt something wet; I looked closer and it was tears.” 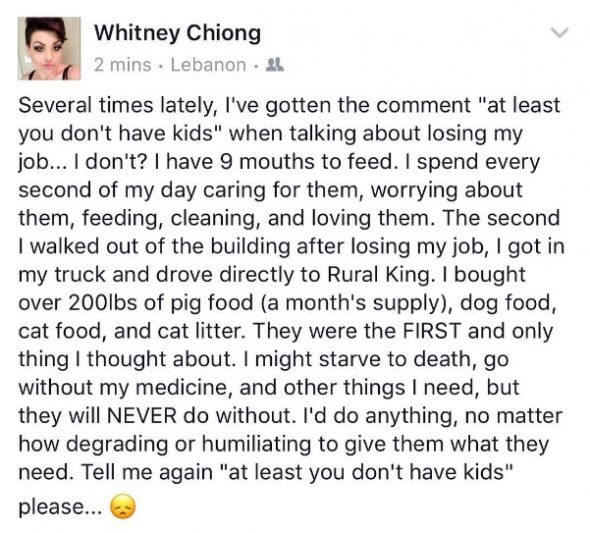 Now it’s her turn to comfort him.  Calvin has been sick for the past few days, and has been having explosive sharts all over the house, leaving Whitney trailing along behind him to clean up.  She spent her paltry final paycheck on medicine and supplies for him.

Rizzo has been doing his part, too; he brought over a ratty old tennis ball, hoping that playing together would make him feel better.  Calvin isn’t up for it just yet, but likely appreciates the support from his buddy. 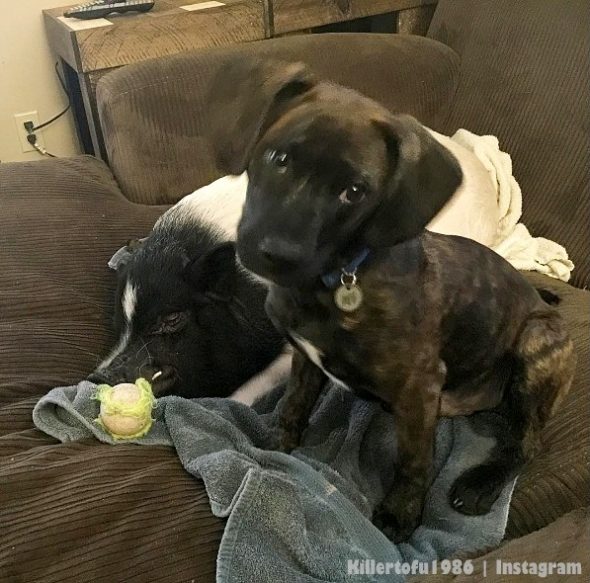 A fundraiser page was set up to help Whitney and all her critters until she is able to find another job.  If you can afford to help them out, please consider giving to this worthy cause by clicking here.  For updates and more photos of this sweet family, follow them on Instagram.

“It’s a madhouse, but it’s so full of love.  I can’t even put into words how grateful I am to have all of these crazy critters.” 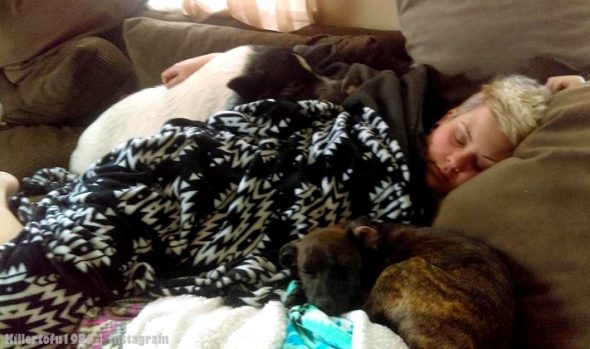