Of all people, I comprehend the need for speed, that feeling of freedom, the oh so liberating rush of air past one`s face. I grew up skiing (both snow and water) snowmobiling and motor boating. My Dad was a champion in that most crazy of Canadian sports, ice racing. Probably the need for speed is in the genes. Thus I understand the attraction of dirt bikes, even though I have never ridden one. However, as in any sport, there is a call to etiquette. I found this great dirt biking link on the Internet with points of safety and riding responsibly. 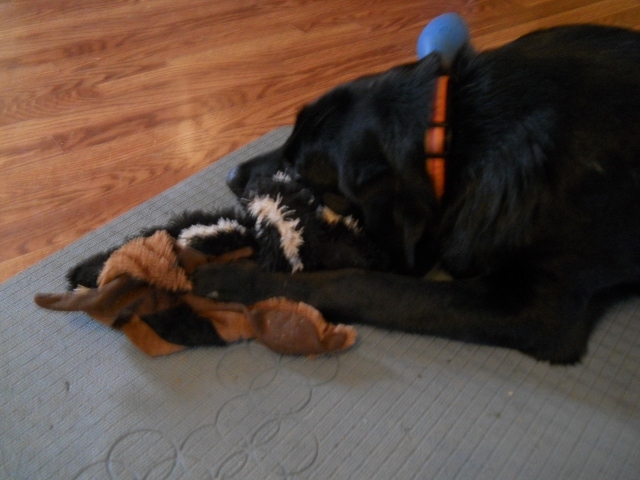 A noise phobic lab and recent dirt bike encounter lent motivation to find the following information: “Respect and common courtesy go a long way. By valuing the environment and those who enjoy it, you keep recreational opportunities available for you and others to enjoy. Remember these basic rules and you will find your outdoor experience to be more rewarding.

Doobie, my 6 year old American Lab endured the first four years of his life in a puppy mill cage as a breeding dog. A dog who lives in a cage for four years is at a distinct disadvantage for learning to cope with the world at large. Initially Doobie was terrified by cars passing by on the street. Today, several years later, he is largely recovered, barring the invasiveness of dirt bikes in close proximity.

Upon initially moving to the Scotchman’s Creek development in Earleville MD, Doobie would become reactive just hearing the novel dirt bike noise from within the house. To Doobie, the noise was aversive and unwelcome. Today, he is quite fine, with exception of the following incident.

Recently, a pair of dirt bikers roaring past on a narrow lane way from the creek proved beyond tolerance. Myself, husband Argil and Doobie had set out to have a peaceful walk and to enjoy the evening. However that proximity and that much noise were too much for my noise sensitive lab. So agitated was Doobie he chewed through his leash and would have given chase, had I not quickly intervened.

As well as the former information obtained via the Internet link, I have a few doggy dirt bike etiquette thoughts:

In order to be safe, I attempt to pick walking times when no dirt bikes have been heard. On this occasion they appeared after we had set out. I don`t enjoy the feeling of being held hostage to the riding whims of those who do not consider the needs of others. There is plenty of environment to share, such that the described incident need not reoccur. I thank anyone who reads this for sharing my suggestions for doggy dirt bike etiquette. Doobie double dittos that statement! Thanks for your consideration on being a safe and responsible rider.