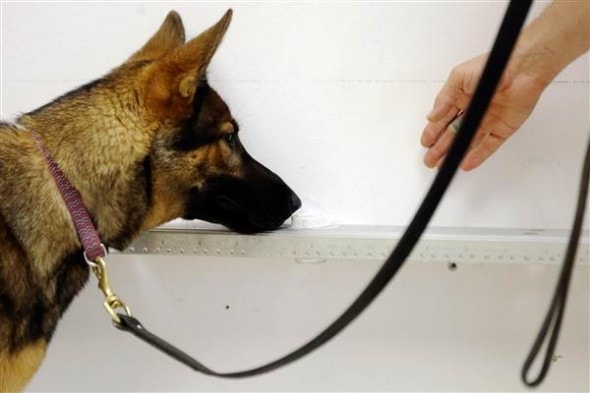 On Sunday, Italian researchers looking into the possibilities of dogs being trained to sniff out cancer, are claiming they can do so with an unbelievable accuracy.

The testing being done to see if dogs can in fact sniff out cancer in a similar way to the various other organic compounds they have been trained to pick up.  So far, the testing has about a 98% accuracy as to dogs being able to detect prostate cancer.

The testing is still in its infancy and may not really be 100% ready for a full medical trial run, but the findings suggest that there may be an easier, and far less invasive way to check for a cancer that kills 29,000 American men every year.

Prostate cancer is not the only thing being sniffed out by these researchers and their dogs.  This study joins an ever growing list of studies and trials showing that dogs can actually smell the byproducts of various types of cancer.

“These dogs were really able to detect these particular compounds with a high degree of accuracy,” Dr. Stacy Loeb of New York University said.  She is a urologist who is not with the study, but is following it closely.

Gianluigi Taverna, of Humanitas Research Hospital in Milan, and his fellow colleagues took urine samples from 320 men with prostate cancer, and 357 samples from men without the disease.  The men with the disease were in all different stages of it, from very low-risk, slow-growing tumors, to cancer that had spread.

The men in the non-cancer group had other diseases or conditions, including other kinds of cancer.

In the study, there was one dog able to detect every single case of prostate cancer, and only gave a false positive around 2% or less of the time in the trials.  The other dog in the study was almost as accurate.

If you take the results of the two dogs in the study together, the accuracy of positive, correct detection of prostate cancer is at 98%, and these statistics were presented to the American Urological Association on Sunday.

“We have definitely turned what used to seem a myth into a real clinical opportunity,” according to the published findings.

“These data show analysis of volatile organic compounds in urine is a promising approach to cancer detection,” said Dr. Brian Stork, a urologist at West Shore Urology in Muskegon, Michigan.

“The possibility of using dogs identifying cancer is something most would never have considered possible a decade or two ago. It’s an interesting concept that ‘man’s best friend’ could help save your life.”

These findings are congruent to those in a smaller study done with a single dog in France, who was able to sniff out the cancer in 33 samples.

Dog are also being tested in their ability to detect lung tumors and ovarian cancer as well.