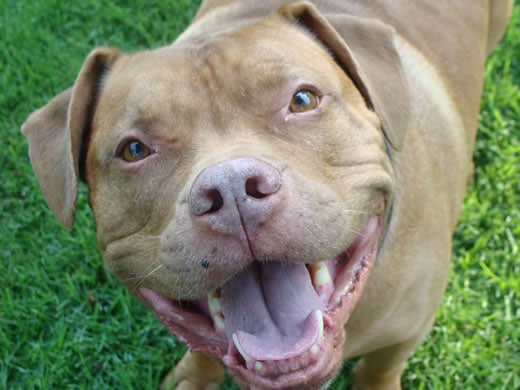 Since the summer of 2011 a pit bull named Petey has been battling brain cancer. Now a new treatment Petey has undergone could help humans suffering from brain tumors.

Petey and his owner Alex Frame had just come back from a walk during the summer of 2011 when Petey had a seizure. “It was kind of a hot day and he was drinking water,” said Frame. “At first, I thought he was choking on the water, and he fell over and had a seizure.” Then a week later, Petey had another seizure. The Frames took Petey to the University of Georgia’s School of Veterinary Medicine where neurologist Dr. Simon Platt ordered an MRI of Petey’s brain.

The results from the MRI weren’t good, Petey had a very large brain tumor. “I was devastated,” said Frame. “I mean I knew that he was sick, but I couldn’t believe how big the tumor was.” The outlook for Petey wasn’t good. If the Frames did nothing he’d only have a few weeks to live, but even the most aggressive treatment would probably only buy him a few months. This is very similar to many humans with brain tumors. Doctors can remove the tumors to buy the patients more time but brain cancer almost always grows back.

Emory University surgeon Dr. Costas Hadjipanayis and his team have been working to find a way to slow down the cancer cells. In their lab they’ve been using the human cancer drug Cituximab and binding it to iron oxide nanoparticles. This carries the cancer drug directly to the malignant cells and avoids the healthy cells.

Dr. Hadjipanayis and his team wanted to try out their new method on Petey. “Really being transparent about the fact it may offer him nothing,” said Dr. Platt. “But we were at least certain that it wouldn’t hurt him.” Dr. Platt surgically removed Petey’s tumor and then the pit bull spent three days in ICU as the experimental mediation was dripped directly into his brain.

So far the results have been good. Petey’s seizures have stopped and when he had an MRI seven months later Dr. Platt was very pleased with the results. “We were stunned at the time that seven months, we saw limited regrowth to no regrowth.”

A year and half later Petey came in for another MRI and Dr. Platt was expecting to see regrowth. “I think we did, in our heart of hearts, believe that we would see a large re-growth of tumor at this stage, even though he’s been doing so well,” said Dr. Platt. The scan of Petey’s brain showed scar tissue, but no tumor re-growth. Dr. Platt had never seen any treatment be this successful.

Dr. Platt has been given a grant to test this breakthrough medication on 15 more dogs with brain tumors. He has already tested it on a few other dogs, one of which had breakthrough results like Petey. If results are successful with future dogs it is possible clinical trials on humans could be started within a few years.