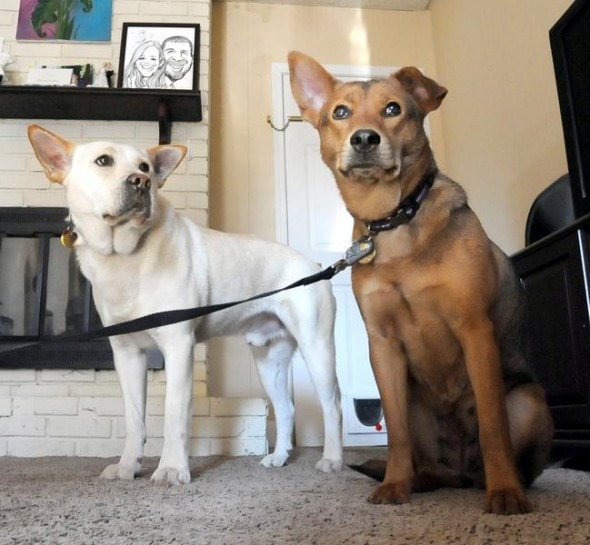 Ben and Jade met on the streets as strays and became each other’s family. The two dogs eventually ended up at a local shelter, but when Ben was adopted and separated from Jade he couldn’t take being away from Jade. Three weeks after being adopted Ben ran away. He ended up 10 miles away back at the shelter sharing kisses with Jade through the fence.

The dogs were brought in off the streets after Jade became pregnant. The Terre Haute Humane Society in Indiana caught the two strays and placed Ben in the shelter and Jade in a foster home until she had her puppies. The puppies were adopted out once born and Jade was placed in the shelter with Ben. The two were reunited but not for long.

Courtney and Jason Lawler adopted Ben and the two dogs were once again apart. After about three weeks of living with the Lawlers ben escaped and headed straight for the shelter and Jade. As soon as shelter workers spotted Ben outside they knew what he was looking for, Jade. At one point ben saw Jade on the other side of the fence and ran over to her and started licking her through the fence.

Ben was hesitant to be caught by the shelter staff but they were able to catch him and reunite him with Jade. Once the two were reunited they were both happy and excited. When the Lawlers heard what had happened they knew what they had to do. They adopted Jade and brought the two dogs home together. “He’d keep getting loose if we took him and not her,” said Courtney Lawler.