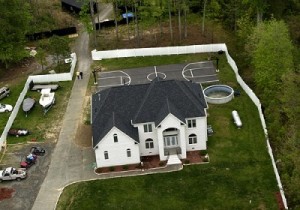 Once the site of unspeakable horrors, Michael Vick’s former Surry County, Virginia home could eventually become a haven for abused and neglected dogs – if Pennsylvania advocacy group Dogs Deserve Better is able to secure funding for the purchase of the property.

Dogs Deserve Better has turned to social media in order to solicit donations to convert the 15-acre property into an animal rehab center. It has established a Facebook page called 999,999 Friends for the Good Newz Rehab Center for Chained Dogs. The non-profit has until March 20 to raise at least $600,000 to purchase the property.

It is estimated that a total of $3 million will be required to create the dog center. The house would become an office and fundraising center, and organizers hope to build a fence around the property and have a monitoring system installed.

Dogs Deserve Better is based in Tipton, Pennsylvania with more than 100 representatives nationwide, and their foster home volunteers rescue and rehabilitate about 400-600 dogs each year.