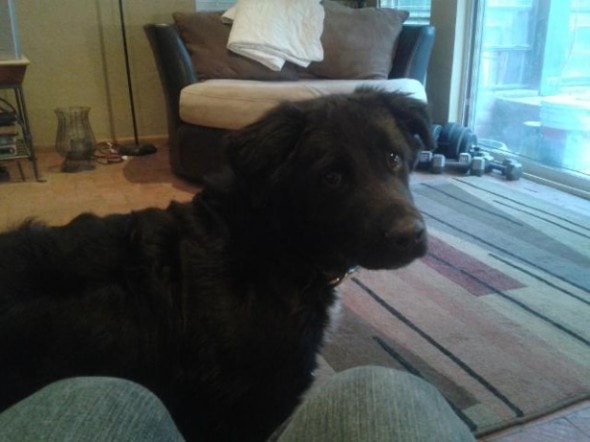 Jessica Garruto and her fiancee was travelling on Interstate 40 near Oklahoma City on Christmas morning when they got into a car accident. Two of their dogs fled the crash and turned their happy holiday into a nightmare.

Jessica Garruto’s Christmas quickly turned bad while travelling on I-40 at 5 am. “We hit a patch of black ice just outside of Oklahoma City on I-40, and the vehicle slid off the road and started rolling,” said Garruto. She was travelling with her fiancée and their three dogs. “We looked in the back, and one of our three dogs was missing,” she said. Their black Newfoundland mix Tobin has fled the accident.

One of their other dogs, Kita, also got scared and ran from the car accident. Kita ran down the interstate and was hit by a car. “A wonderful Good Samaritan found Kita, our shepherd-huskie mix, and took her to the vet where we found out she had a broken leg,” Garruto said.

Kita was safe at the vet but Garruto and her fiancée still couldn’t find Tobin. The following day someone spotted Tobin back near the accident scene and called Garruto. She and her fiancée raced back to the scene. Garruto started calling for Tobin and he timidly appeared, “He took like one or two little steps, and then I called him and he ran over and I just started hugging him. It was great.”

Tobin was a little banged up and had to get a few stitches but is now safe and back with his family. Kita will need surgery to fix her leg and the family will be staying in Oklahoma City until she is ready to travel. Garruto is very grateful that both her dogs are back and safe. Her nightmare Christmas, “somehow became the best Christmas ever.”