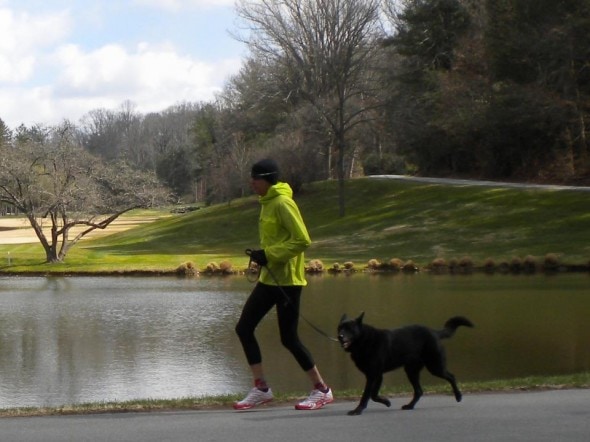 You need a personal trainer but Euros or dollars are short? Your dog could be the perfect solution. Its called Camicross.

If you see a dog leading a human by a cord connected to the human’s belt down the street in Edinburgh, Scotland and they are moving at a swift jog you may be watching Europe’s newest fitness craze. Camicross is a runaway new favorite among Scotland’s fitness fans.
What is Camicross? The sport, which originated in Europe, includes a dog wearing a harness which is attached to its human’s belt by a two0meter bungee cord. All levels of humans and dogs can participate from sporting dogs to lap dogs.

Camicross started in Europe as an off-season activity for sled-dog racers and their dogs to stay in shape but others have since picked it, and that two-meter cord, up. Many dogs seem to love Camicross and pick it up quickly.  Camicross is a team effort so dog and human have to be well-matched for the running.

Camicross has found a strong home in Edinburgh, Scotland where 20 dog-human teams showed up for the first run about eighteen months ago. The founders want to keep the sport non-competitive and accessible to all skill levels and ages. The youngest Edinburgh Ccamicross  athlete  is only nine-years-old. The leaders say that that there are dogs  of all sizes from a little Westie mix to a Ridgeback who run with their humans. No experience or training is necessary to sign up to run in Camicross but it is advised to get their pet co-runner checked out by their veterinarian before getting serious about the sport.