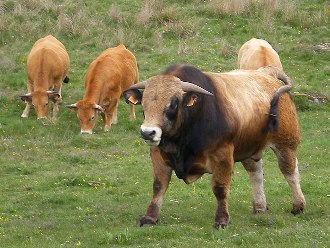 Officials say a Massachusetts farmer is lucky to be alive thanks to his fearless dogs after suffering a brutal attack involving a 1,500-pound bull.

His girlfriend witnessed the attack Saturday morning. “The bull just got angry and started throwing him around the field,” said Ellen McKeon, 50. “When he landed a couple times, I thought the bull had him. I didn’t think he was with us anymore. My heart stopped.”

Richard Gerulaitis was spreading bales of hay when the bull charged. His dogs were nearby and immediately came to the aid of their guardian. His border collie Jack and  mixed breed Katie heard his cries for help and charged the bull.

The heroic canines fought the bull, keeping it away from Gerulaitis as McKeon dragged him to safety. “The border collie was bitten right on to the bull and the bull was fighting with the dogs,” McKeon said.

Hardwick police Cpl. Kevin Landine referred to Jack as a real-life Lassie, noting that the dog very likely saved the farmer’s life when it latched on to the bull’s snout and would not let go.

Gerulaitis has had surgery to remove a lacerated spleen, and is recovering from broken ribs,  a collapsed lung and a bruised heart.  While he has a long road to recovery ahead of him, McKeon says if it weren’t for the dogs he might very well have perished.

“I just thank God for the dogs and I’m doing nothing but praying,” McKeon said.