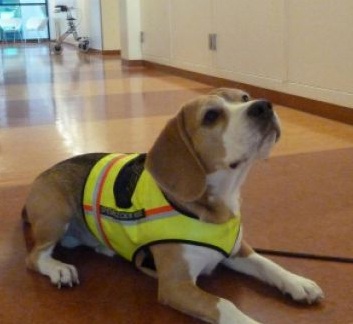 Dogs have long been known to detect cancer, oncoming seizures and spikes in blood sugar, and now one more thing can be added to the list:  C. difficile.  A two-year-old beagle called Cliff has been trained by researchers in the Netherlands to sniff it out.

Clostridium difficile is a very dangerous and sometimes deadly superbug.  It’s one of the most dangerous infections in the last few years, and targets elderly hospital patients who have recently taken antibiotics.  It has become a superbug because of its resistance to antibiotics, due to the overuse of antibiotics in hospitals.

“The whole problem with C. diff is it’s transmissible,” according to Dr. Marije Bomers, the study’s lead author and a consultant internist and infectious disease specialist at VU University Medical Center.  “If one patient has it in the ward and you don’t isolate the patient, it’s not just one patient – it’s two, it’s three, and then half your ward has C. diff.  In order to try and prevent transmission in your hospital, it’s important to recognize C. diff patients as early as possible.”

In healthy persons this bacteria can go unnoticed in the gut.  But when antibiotics are taken to kill harmful bacteria, the helpful bacteria, or gut flora, are destroyed.  This leaves the body susceptible to rampant takeover by bacteria that can now become deadly.  In essence, we need some of our germs to help maintain balance and keep harmful germs in check.

Bomers said the motivation for training a dog to detect C. difficile came when it occurred to her that humans can smell out this bacteria, and if humans can, dogs should have no problem.

Bomers came to meet Hotsche Luik, a psychologist who became an animal trainer.  Luik had trained police dogs, and decided she would try using her own dog for this project.

“It’s a known system of conditioning,” Luik said.  “The value of the smell – we made it important and fun for him.  First, we used lots of smells where I could almost smell it, and that was easy for him to find.  Then it became more fun and a challenge to find it.”

C. difficile affects about 14,000 people each year in the US, and with the help of super-sniffers like Cliff, perhaps that number could be reduced.

“At the moment, I can’t take it any further here,” Bomers said.  “I’d have to go elsewhere and see where it goes… But if there are hospitals or areas with high C. diff incidence, this could really help lower that.”