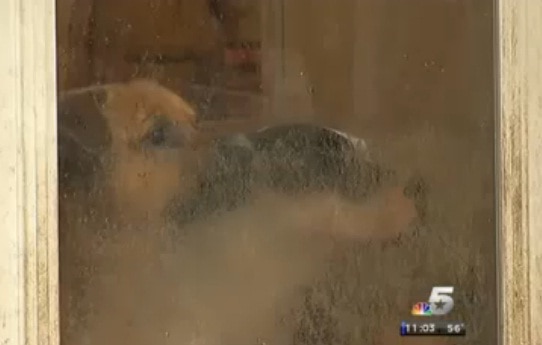 Texas dogs came to the rescue and stopped a potential burglar when the woman tried to hide in their dog house.

The unnamed woman broke into Amanda Moore’s Fort Worth home and was startled by Moore as she exited her bedroom.

“I heard a noise in my middle bedroom, and all of a sudden, my bedroom door opened, and there was a lady in my hallway,” Moore said.  “I woke up and she [saw] me, she ran back out the window and went into the neighbor’s backyard.”

Moore quickly called her neighbor, Jerry Gambino, when the robber went into his backyard.  He had let his dogs out and soon heard a commotion.

“When I came back here, all three dogs were in the dog house,” Gambino said, “and I saw her legs sticking out, I was yanking the dogs out by the tail, at least if I pull them by the tail, they’re going to either back up or try to bite me.”

The woman did sustain a number of bites to her lip and hand, and was taken to a hospital.

There is no consequence to the dogs, as they were within their rights to defend their yard and their own personal dog house.