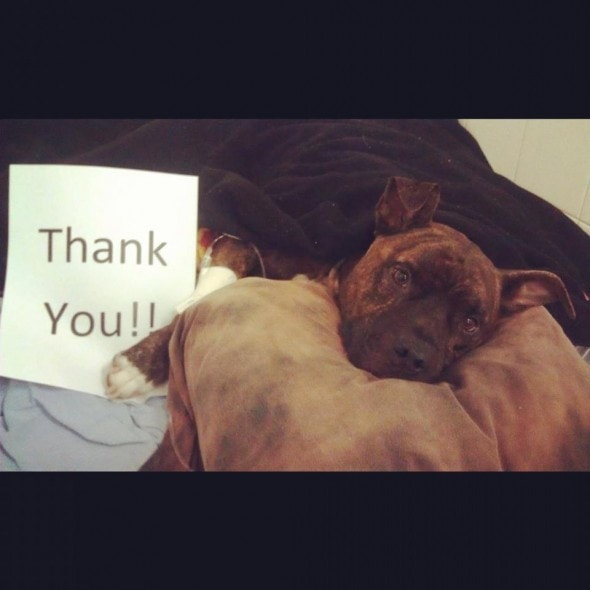 Earlier this month Dexter, a 3-year-old Pit-bull, was hit by a car. The accident shattered Dexter’s hind legs and it would cost $10,000 to save him. Dexter’s owner Dominigae Devenney didn’t have the money and thought she was going to have to put Dexter down. Then Dexter’s story went viral and donations came flooding in.

Devenney had rescued Dexter from the SPCA 2 years ago, on the day he was to be put down. On November 3rd, Dexter escaped from Devenney’s yard and was hit by a car near a busy intersection in Hatfield, Pennsylvania. The people driving the car stopped and were very upset for having injured the dog.

Devenney’s father was approved for a Care Credit card for $2,500, but that was quickly maxed out just to keep Dexter comfortable and medicated.  Devenney created a Give it Forward page for Dexter hoping to raise the funds. She couldn’t imagine that $10,000 dollars would be raised in time though. On November 6th she went to visit Dexter and thought she was going to have to put down her beloved dog. When she went to say goodbye Dexter picked up his head and wagged his tail and Devenney realized she couldn’t put him down. She needed to fight for him. She had 24 hours to try to get the necessary funds raised.

The fundraising first started with friends, who chipped in knowing how much Devenney cared for Dexter. They also put jars out at local businesses, but the fundraising really took off once the Give it Forward page started circulating on the web. Soon it was all over Facebook, and a YouTube video was even made. The donations started pouring in from all over. In just 10 hours all $10,000 dollars was raised.

On November 10th, Dexter got to come home. Devenney is thankful for all the strangers who helped save Dexter. “I would’ve had to sell all my belongings…to get even close to what (was contributed online),” said Devenney.  She is also thankful to the Metropolitan Veterinary Hospital for taking such good care of Dexter. Now that Dexter’s surgeries are complete The PET MECHANIC in Philadelphia, PA has offered to care for Dexter with his post-operation needs and medications. Devenney’s friend Nikita Roman says the generosity from so many strangers has restored her “faith in society”.