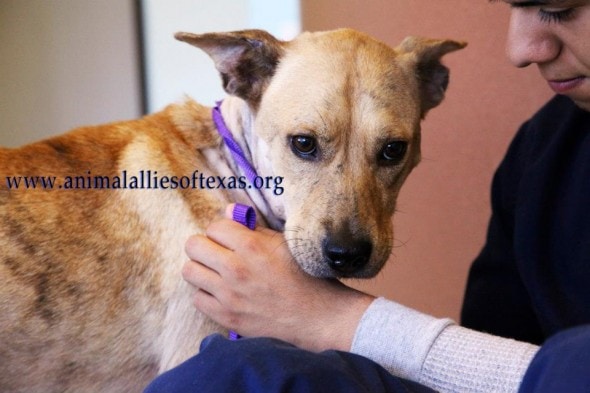 Olivia, the emaciated Dallas dog whose neck was stuck in a coffee can, is doing remarkably well considering her unfortunate circumstances.  She was found running in October with another stray named Joshua.  Her companion, who had only been running with her for a couple of days, would not leave her side.  Had Olivia not been rescued when she was, she would have died within a few days.

She was originally called Java by the good Samaritans who found her, but has been renamed.  Olivia was taken in by Animal Allies and has been recovering since the coffee can encasing her neck was removed.  The can restricted her neck to the point that she could not eat, and was slowly starving to death.

“The coffee can had embedded in Olivia’s flesh and, as she grew, it had cut into her jawbone and ear canal,” said a representative with Animal Allies.  “It nearly decapitated her.  Her chest/neck area had a 4-inch deep gash.  She was very, very lucky that she was found when she was and that her surgical team was so excellent.” 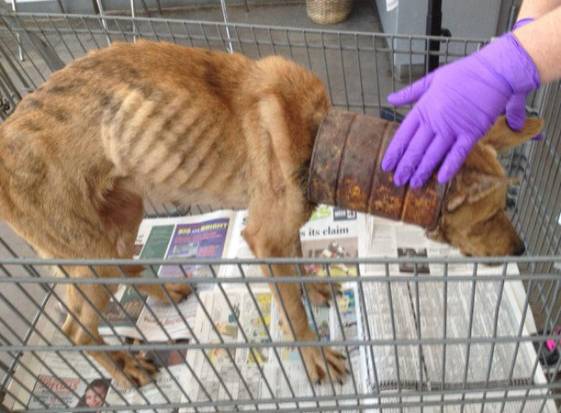 Metro Paws Animal Hospital determined that Olivia was (likely) visibly pregnant when the can was put around her neck.  Due to her alarmingly poor state of health, she would have been unable to nurse, and her puppies died.

Now Olivia is no longer in agonizing pain or starving.  She still looks thin, but has gained about 12-15 pounds.  She’s had minor corrective surgery on her neck and been spayed.

“She’s doing very well and is, we think, out of the woods at this point,” said an Animal Allies member.  “Her bandages are off, IV catheter is out, she’s walking about, wagging her tail, giving little kisses, and eating little meals all day long.”

Joshua is also doing well in his foster home.

“Joshua is doing great,” said foster mom Carol.  “He is settling in very well and is showing his foster brothers and sisters the same kind of sweetness he showed Olivia (Java’s new name).  Jim has been in contact with Animal Allies of Texas and we’re waiting for the right time to reintroduce Joshua and Olivia.”

Authorities are still searching for the person(s) responsible for this heinous act.  Anyone with information should call 214-670-6800.