Vermont state police called in The Humane Society of the United States’ Animal Rescue Team last Tuesday to assist in the rescue of 54 dogs from a Bakersfield, Vt., property. The dogs were being housed in unsanitary conditions and lacked proper socialization and medical care. The Vermont state police seized all 54 dogs.

“Many of these dogs were living cramped in filthy wire pens in dank, windowless outhouses. This is precisely why Vermont desperately needs to pass legislation regulating large-scale breeders,” said Joanne Bourbeau, Vermont state director for The HSUS. “The Humane Society of the United States is proud to work with local groups to give these animals the second chance they deserve.”

This case began when the state police received complaints from citizens concerned for the welfare of the dogs. The state police then called in The HSUS to provide animal handling, transportation and sheltering assistance. The Humane Society of Chittenden County and the Franklin County Humane Society were also on hand to provide animal handling and transportation assistance. 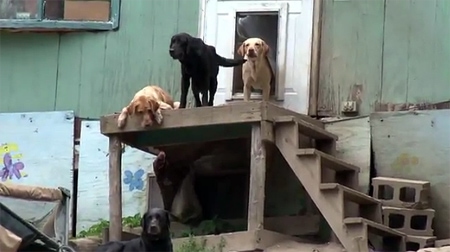 “I hope that results of today’s investigation and seizure of animals from the Bakersfield site will result in a swift and successful prosecution of the individual or individuals involved in this operation,” said Tom Ayres, president and CEO of the Humane Society of Chittenden County. “We need to send a clear message to Vermonters that these kinds of inhumane enterprises exist in our midst and that we cannot and will not tolerate them.”

When responders arrived on scene they found the Labrador retrievers living crowded in small wire feces-encrusted enclosures. Many of the dogs were underweight and suffering from a variety of medical issues including dehydration and untreated wounds. The property owner was selling puppies over the internet and through classified ads to unsuspecting consumers.

Once safely removed, the 54 dogs were transported to an emergency shelter. There the dogs will be thoroughly examined by a team of veterinarians and provided medical treatment. The HSUS will oversee the shelter and care of the dogs until their custody is determined in an upcoming disposition hearing.

22 thoughts on “Dozens of Dogs Confiscated from Vermont Puppy Mill”