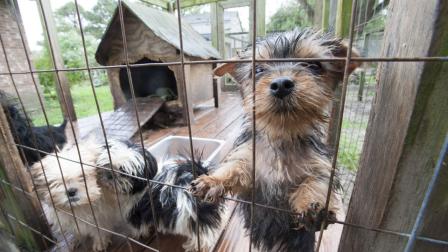 Dozens of animals were rescued from a puppy mill in North Carolina on Wednesday after someone complained about a sick dog.

Several agencies teamed up to respond to the report of a sick puppy at the North Carolina home where they found nearly 100 animals including over 50 dogs. In addition to the dogs were chickens, cows, a horse and a goat. The dogs were being kept outside in wire chicken coops.

The owner agreed to surrender all the animals and they were transported to a temporary emergency animal shelter to be treated by veterinarians. All animal will get a full examination Thursday morning.

“[The animals] definitely need to be groomed, we saw some tumors, some deformities, a lot of different issues with the dogs,” said Marsha Williams with the Guilford County Animal Shelter.

The dogs rescued include Rottweilers, Pit Bulls, German Shepherds, English Bulldogs, Chihuahuas and several other breeds. Once the animals get the necessary veterinary treatment and socialization they are expected to be ready for adoption in about two to three weeks, though some will take longer.

“They’ll be rehabilitated with the Guilford County Animal Shelter and the SPCA of Wake County,” said Kim Alboum, Humane Society of the United States state director. “A lot of them will likely go in foster homes for an extended period of time due to the state they are in.”