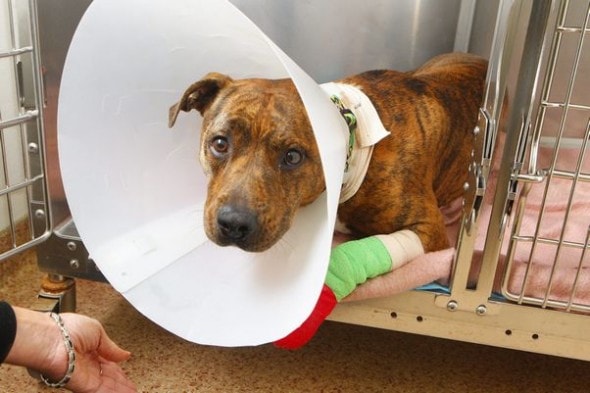 Five weeks after being dragged behind his owner’s SUV, Gotti is healing well and ready for a new home.  In early October his owner Daniel Delaney Jr., who was jailed on an animal-cruelty charge following the incident, drove away with poor Gotti tied to the back of his vehicle.  He claims he forgot that the dog was tied up and expressed remorse for his actions but has been in jail ever since, unable to post bail.

A judge imposed the bail to ensure that Delaney came up with funds to pay for Gotti’s treatment which is projected to be around $1200 when all is said and done but he has been unable to post the bail.  “It would be completely irresponsible for us to return the dog under these circumstances,” said Gina Browning, director of public relations for the local SPCA. “The last thing the SPCA is going to do right now is return a dog to a man who is facing an aggravated animal cruelty charge.”

The 36 year old fought the court injunction that required he forfeit the dog, but last Friday he relented and signed Gotti over to the SPCA of Erie County.  The courageous animal suffered leg injuries and lost the pads on his paws as a result of the incident.  He also suffered from a respiratory infection which is now cleared up.  On Monday, Gotti was examined and found to be in good health and given the all clear for adoption.

“We’ve tried some different kinds of treatment that have worked beautifully,” Browning said. “He’s walking gingerly, but he’s walking.” Gotti is a 2 year old pit bull who deserves a loving forever home after his ordeal.  Hopefully he will get that very soon.  If you are interested in adopting Gotti, follow this link  http://www.yourspca.org/pages/news/news-cruelty/gotti-dragged-dog-available-for-adoption-11/12/12?.